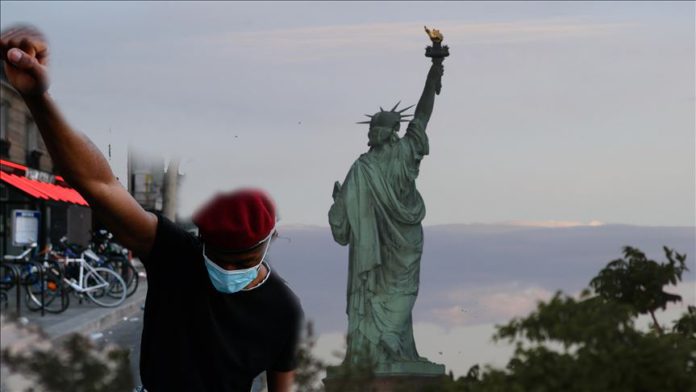 Oguzhan Yanarisik completed his doctoral studies in politics and international studies at the University of Warwick, UK. He is now on the faculty of the Institute of Security Sciences of the Turkish National Police Academy in the capital, Ankara.

On May 25, a greengrocer shop in the city of Minneapolis complained to a customer about allegedly trying to pay with a counterfeit $20 bill. After arriving at the scene, police sought to take the suspect, George Floyd, out of his car and take him into custody. Police officer Derek Chauvin pressed the suspect, who was lying on the ground, with his knee around his neck for close to nine minutes, leading to his death.

At the same time, two other police officers were pushing their hands behind the back of the African-American suspect, who was handcuffed. In the long minutes before his death, Floyd repeatedly told the police that he could not breathe, but they paid him no attention. Even after he lost consciousness, Chauvin continued to press on his neck for more than three minutes.

The rapid spread of footage of this incident ignited the roving street events that would last for days in more than 140 cities across the whole United States. Many businesses were looted during the demonstrations, vehicles were set on fire, and buildings were damaged, although some of the demonstrations were peaceful.

The main trigger for the events was a renewed outburst of anger at the police’s constant use of disproportionate force against black people. For many demonstrators, the event also had the dimension of resentment that has accumulated for years against socio-economic inequality and racial discrimination. According to some observers, these events foreshadowed the end of the “American dream,” while according to others, they were the latest example of events that have happened many times before in the United States.

Curfews have been declared in more than 40 cities, including New York and Washington DC. In more than 20 states, US Army National Guard units were tasked with controlling the demonstrations. However, these measures have so far neither prevented people from going out to the streets nor prevented the demonstrations. The police officer who caused Floyd’s death by pressing him around the neck has been charged with third-degree murder. Hundreds of demonstrators have been arrested for such crimes as firearms violations, theft, looting, and rioting.

The events have also reignited deep political divisions within US society. So far, politicians and bureaucrats have chosen to blame each other rather than form a joint action plan. Democrats accused President Donald Trump of failing to show leadership. They also blamed him for his words and actions, which further deepened the racial divisions within the country.

Trump, on the other hand, accused Democrats of supporting demonstrators who broke the law and being part of the groups that stirred up the country. Both sides suggested that the other was trying to take political advantage of the events. Trump also criticized governors for not being tough enough and called for tougher measures against the demonstrators. He declared that he had deployed thousands of heavily armed military personnel and security forces in order to intervene in the violence in the country.

The most prominent feature of the events was the mutual violence of both the police and the demonstrators, and the continued escalation of this violence. In fact, what led to the demonstrations was a repeat of white police officers’ discriminatory treatment of black American citizens and the use of excessive violence.

Cases of unnecessary excessive use of force by the American police against civilians are frequently raised. For example, the neck tightening method, which also led to death in this case, has been used at least 237 times since 2015, according to the use-of-force records of the Minneapolis Police Department. In 44 of those incidents, the suspects lost consciousness. Therefore, in fact, the death of George Floyd was no exceptional event.

According to data from the Mapping Police Violence NGO, the US police killed 7,666 people from 2013 to 2019. It was black Americans who were disproportionately victimized in these deaths. According to this data, the probability of a black US citizen being killed by police is two-and-a-half times higher than that of a white citizen. In some states, the rate is more than nine times that. Indeed, this police violence targeting black citizens in the United States has inspired movements such as Black Lives Matter.

At the other end of the spiral of mutual violence were the demonstrators who burned things down. Hundreds of demonstrators were detained on charges of resisting the police, theft, assault, arson and vandalism. There have been incidents of organized violence beyond individual cases.

At this point, some anarchist and violent groups came to the fore. President Trump directly blamed the anti-fascist group Antifa for the incidents. The Justice Department has decided to begin procedures to classify Antifa as a terrorist group, according to a statement from the White House. The group has also been covered by the Turkish media for its support of the YPG/PKK terrorist organization.

Is this the end of the United States?

It would be quite extravagant to describe these social events, which are still ongoing and whose outcome is not yet fully known, as a civil war or to portray them as the end of the United States. At this point, it is worth saying that recent US history has been filled with dozens of protests that have resulted in casualties and days of conflict.

That does not mean, of course, that the events that are happening now are trivial. We can say that the American community, which has been experiencing damage from the COVID-19 outbreak in an extremely intense way, feels deeply about the effects of these street events.

Indeed, according to some observers, 2020 has already been the most traumatic year in modern American history. More Americans have lost their jobs this year than in the Great Depression. More American citizens have died from the epidemic than in many wars. The great failure to combat the epidemic has greatly damaged faith in the capabilities of the public and private sectors of the United States.

American society has never been this polarized, according to observers who paint a pessimistic picture of the nation’s future. The police, which directly target civilians and even members of the press, showed how brutal the state has become. The plunder and theft of many demonstrators revealed the extent of social decay. The way politicians are fighting with each other instead of making common-sense statements has undermined the prospects for the future. Longstanding and ignored inequalities have spread again.

It has become increasingly impossible to ignore the suppressed and displaced problematic areas of the country. Disputes between the central government and local authorities have begun to lock down the whole system. Given the worsening global conditions around the world, the already badly damaged US claim to global leadership has completely lost its meaning.

According to some observers, the “American dream” is now over. To others, such a dream has never existed. The only thing that happened this time was that the masks fell, the curtains of lies were torn apart, and the people were awakened from false dreams to painful realities.

* Translated by Merve Dastan in Ankara