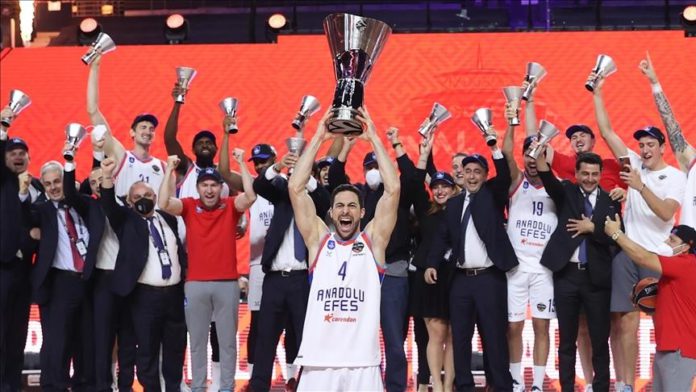 Turkish basketball powerhouse Anadolu Efes filmed their 2021 Turkish Airlines EuroLeague success story and the first of its four-episode movie will be aired on Sunday, the club said on Saturday.

In a statement, Anadolu Efes said that the team’s success story in the European campaign will be broadcast on their YouTube channel.

The Istanbul club added that the first episode, A Padlock In Cologne – Part I: Arrival, will be available to watch on Sunday.

The title of the film, A Padlock In Cologne, originated from a fan’s wish for a championship. The name refers to a padlock, which read “Anadolu Efes F4 Champ,” hung by an Anadolu Efes supporter on a bridge in Cologne.

The Final Four of the EuroLeague was scheduled to be held in Cologne before the COVID-19 pandemic hit the world.

One of the favorites for the title, Anadolu Efes were crowned the 2021 EuroLeague champions for the first time, defeating Spanish opponents Barcelona 86-81 in the final held in Cologne’s Lanxess Arena on May 30.​​​​​​​