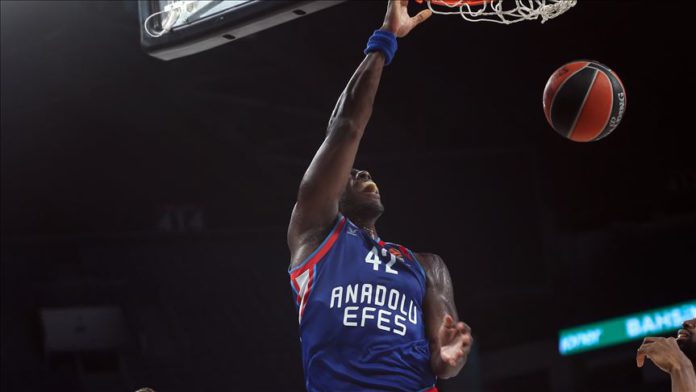 Serbian guard Vasilije Micic scored 20 points for Anadolu Efes victory at the Peace and Friendship Stadium in Piraeus. He also had 7 assists.

The other Anadolu Efes guards, Rodrigue Beaubois and Shane Larkin produced 15 points each.

Martin, Sloukas and McKissic were the only Olympiacos players scoring in double digits.

Anadolu Efes had two wins but three losses in the 2020-21 EuroLeague regular season.

The fifth round game against France’s LDLC ASVEL Villeurbanne will be played on Dec. 8 as it was previously postponed due to coronavirus cases in teams.

In the next game, Anadolu Efes will take on Israeli opponents Maccabi Playtika Tel Aviv in Istanbul on Nov. 5.

The Greek club will visit Russia’s Zenit St Petersburg in the Round 7 next week.

The tournament organizers, Euroleague Basketball offered condolences to the earthquake victims on Friday.

“Euroleague Basketball offers heartfelt condolences for all those affected by today’s earthquake in Greece and Turkey,” it said on Twitter.

In addition, Olympiacos and Anadolu Efes offered their condolences each. Both clubs also wished quick recovery for those who were injured in the disaster.

At least 20 people were killed and 786 others were wounded in magnitude-6.6 quake in Izmir, Turkish Aegean region, Disaster Management Agency said as of 01:00 a.m. Turkey time.

Two children were also reported dead on the Greek island of Samos.