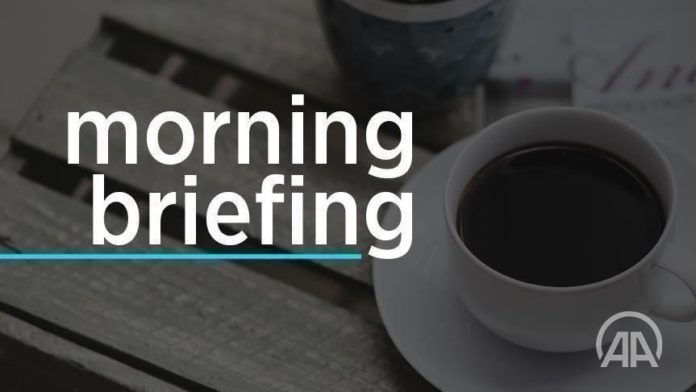 Turkey on Thursday reported 1,512 new cases of the novel coronavirus, and more than 1,200 recoveries. The country’s overall infection count reached 286,455, according to Health Ministry data.

“Macron continues colonialism, while our President [Recep Tayyip Erdogan] continues to defend the interests of the oppressed peoples, protect the peace, and frustrate the colonialists’ games,” wrote Omer Celik, spokesman for the Justice and Development (AK) Party, in a series of Tweets.

Turkey’s foreign minister said his country expects the European Union to act as an “honest broker” in the Eastern Mediterranean region.

Turkey’s National Defense Ministry said the technical meeting between Turkish and Greek military delegations concluded. Both sides discussed measures aimed at preventing possible military engagement in the Eastern Mediterranean, according to a statement.

Here is an analysis you may be interested in reading about the transformation of the Eastern Mediterranean.

The final manufacturing stage of the first reactor of Akkuyu Nuclear Power Plant has started, AEM-technology, which operates alongside Rosatom’s machine-building division of Atomenergomash, announced on Thursday.

Turkish intelligence agents arrested a member of the PKK/KCK terror group in Ukraine and brought him back to Turkey in a special operation.

When a young mother-to-be in southeastern Turkey felt her baby unexpectedly coming, she got help with the delivery from an unexpected source: a satellite cellphone used skillfully by a local security officer.

Turkey denounced an Islamophobic attack in Sweden in which protesters burned a copy of the Muslim holy book Quran, characterizing it as a “disrespect”.

The number of people who tested positive for the coronavirus in England rose 43% in one week, according to figures released Thursday from the National Health Service.

Dozens of schools across Spain registered fresh coronavirus cases during the first week of classes, the education minister said. A total of 10,764 new infections were reported in the past 24 hours — the highest figure since the start of the pandemic.

Around 180 vaccines to combat COVID-19 are in development worldwide, including 35 in human trials, the WHO chief said on Friday.

The number of coronavirus cases in Latin America and the Caribbean surpassed 8 million Thursday, with the virus showing no signs of slowing down in some countries.

South African President Cyril Ramaphosa told an international health meeting that clinical testing for COVID-19 vaccines needs to include African populations to ensure they are appropriate for Africans.

Bosnia and Herzegovina reopened its international borders, after more than five months of closure due to the coronavirus pandemic.

Africans living with noncommunicable diseases such as hypertension and diabetes are more likely to suffer severe cases of COVID-19 and eventually die, according to the Africa office of the World Health Organization.

A massive explosion rocked the city of Zarqa in Jordan early Friday due to an electric short circuit at an army munitions depot, according to a government spokesman.

China slammed the US decision to revoke visas of more than 1,000 Chinese students and scholars deemed to be a “security risk”.

Chinese technology giant Huawei on Thursday unveiled its latest version of self-developed Harmony operating system (HarmonyOS) that is seen as an alternative for Google’s Android, the country’s state-run media said.

Greece on Thursday denied that it attended technical talks with a Turkish military delegation at NATO headquarters, according to its official news agency.

Iran’s armed forces on Thursday began a large-scale military exercise in the southern waters of the country amid unprecedented escalation of tensions with the US.

The EU on Thursday officially extended its sanctions against violation of Ukraine’s territory for another six months. The measures include travel restrictions and freezing of assets, targeting in total 175 people and 44 entities.

The US designated four Russia-linked individuals Thursday for allegedly attempting to influence the American presidential elections in November.

Uyghur from Canada walks 380 kilometers for his people