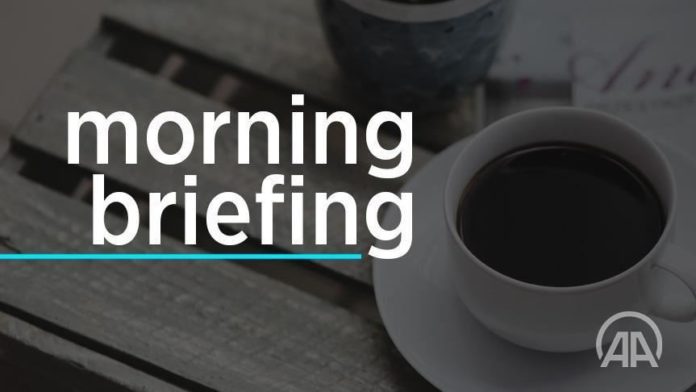 More than 1,600 new coronavirus cases and greater than 1,000 recoveries were reported in Turkey while, the nation’s overall infection count reached 288,126 with 1,671 new cases.

Turkey began new measures to stem the spread of the coronavirus, mandating quarantining at dormitories and hostels for patients who violate home-based self-isolation.

Three Turkish soldiers were martyred and another was wounded during an operation in eastern Turkey.

Authorities issued arrest warrants for 130 people for alleged links to the Fetullah Terrorist Organization (FETO), the group behind the 2016 defeated coup.

A new anti-terror operation has been initiated around Mt. Herekol in Turkey’s eastern Siirt province, the Interior Ministry announced.

Turkish forces conducted a search and rescue exercise off the coast of Libya, the National Defense Ministry announced.

A new declaration by southern EU states threatening sanctions on Turkey is “one-sided” and ignores the reality in the region, Turkey said.

Five more deaths and 197 new infections in Nigeria has pushed the nationwide death toll to 1,075 and the number of COVID-19 cases to 55,829 since March.

The number of cases in Africa reached 229,428, the Africa Centres for Disease Control and Prevention said. More than 1.3 million have been infected on the continent, and the death toll rose to 32,117. The number of recoveries in Africa nears 1.1 million.

As Indian data shows 4.5 million people infected by the virus, a recent survey estimates it had 6.4 million infections three months ago.

Spain’s Health Ministry reported more infections Friday than any other day since the pandemic began — 12,183 cases, bringing the total to more than 566,300.

Israel and Bahrain agreed to establish full diplomatic relations in a second breakthrough between Tel Aviv and its Arab neighbors after it normalized ties with the United Arab Emirates (UAE) last month.

India and China agreed to quickly disengage troops at the disputed border amid a months-long faceoff, a joint statement said.

Wildfires spread by gales continue to blaze the US state of California and its northern neighbors, as the death toll reached 10.

The Los Angeles Lakers beat the Houston Rockets 110-100 to take a 3-1 lead in the best-of-seven series in the Western Conference semifinals.

The Singapore Airlines Group announced it is laying off 4,300 employees from three airlines because of the impact of the COVID-19 pandemic.

The stage is finally set in the Qatari capital, Doha, for warring Afghan parties to settle their differences through talks.

The US, Qatari and Afghan governments, as well as Taliban leaders, simultaneously announced a readiness to kick start the crucial intra-Afghan dialogue process beginning Saturday.

Germany agreed to take more than 100 children from a Greek refugee camp which was destroyed in a fire, the country’s interior minister said.

US accusations about Russia meddling in its 2020 presidential campaign are “ungrounded,” according to Russia’s foreign minister.

The US solemnly commemorated the nineteenth anniversary of the Sept. 11, 2001 terror attacks in which 3,000 lives were lost when al-Qaeda hijackers struck American financial and political capitals in the US.

Support for Scottish independence continues to be the majority opinion in Scotland, according to the latest poll released.

Participants from the Balkans and Europe took part in the opening ceremony of a virtual third Al Jazeera Balkans Documentary Film Festival (AJB DOC) in Bosnian and Herzegovina’s capital, Sarajevo.

The Peruvian Congress voted Friday in favor of starting an impeachment process against President Martin Vizcarra.