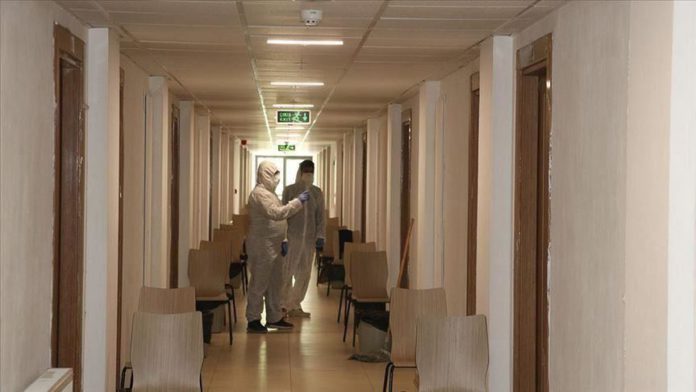 The country’s overall case count now stands at 318,663 with recoveries totaling 279,749, according to Health Ministry data.

Nearly 112,098 coronavirus tests were conducted over the past 24 hours, bringing the overall tally to over 10.38 million.

The death toll from the virus reached 8,195 with 65 more fatalities.

The ministry also said that the Armenian army used the Tochka-U, a Soviet high-precision tactical ballistic missile, against Azerbaijani forces.

Infrastructure suffered damage in the region, while no civilians were injured in the attacks, it said.

It said police used tear gas to disperse activists who gathered at a park in Ardabil city in solidarity with Azerbaijan in the wake of Armenian attacks.

Turkey refuted claims that Turkish aircraft and drones were used against Armenia.

“This is nothing but black propaganda intending to rally support behind Armenia by creating a false perception that Turkey is now opposing Armenia,” Turkey’s Ministry of National Defense said in a statement.

Azerbaijan also dismissed claims that Turkey had recently downed an Armenian jet, saying the aircraft had instead crashed into a mountain.

France’s president expressed solidarity with Armenia amid its conflict with Azerbaijan over Armenian-occupied Upper Karabakh.

The UN Security Council threw its weight Tuesday behind Secretary-General Antonio Guterres’ call to end fighting in the Upper Karabakh, or Nagorno-Karabakh region.

COVID-19 has claimed more than a million lives in 188 countries and regions since it was first detected in Wuhan, China in December.

Although over 1 million lives are confirmed to have been lost to COVID-19, the real number is “certainly higher,” said the director-general of the World Health Organization (WHO).

Over 33.83 million cases have been reported worldwide, with recoveries surpassing 23.5 million, according to figures compiled by US-based Johns Hopkins University.

Indian officials announced that one in 15 people aged 10 or above are estimated to have been exposed to the novel coronavirus by August.

Tough restrictions due to the coronavirus in South Korea have affected the mental health of its citizens, an official survey showed.

Four out of 10 residents in the capital Seoul believe their mental health has deteriorated due to the novel coronavirus outbreak in the country, according to Yonhap News Agency.

As the world grapples with the second and third waves of the coronavirus that has played havoc with societies and economies across the globe, North Korea says it has no COVID-19 cases so far.

At least 35,954 people across Africa have died of coronavirus-related complications, the Africa Centres for Disease Control and Prevention said in an update Wednesday.

At least 183 additional fatalities from the coronavirus pandemic have raised the death toll in Iran to 26,169, the country’s Health Ministry said.

The coronavirus situation in Russia got worse Wednesday as the number of cases showed further growth and the highest daily death toll in two months was registered.

Israeli Prime Minister Benjamin Netanyahu said Wednesday that exiting the lockdown imposed to stem the spread of the coronavirus will be slow and gradual and could continue for an entire year.

British parliamentarians and peers are pushing for Uighurs and other Muslim minorities to be given the right to seek a ruling by the UK High Court that a genocide is taking place in China, which would limit UK trade ties with Beijing, local media reported.

Dozens of Syrians demonstrated in Idlib, a city in northwestern Syria, to mark five years of Russia’s intervention in the civil war supporting Bashar Al-Assad’s regime.

Pakistan urged the UN General Assembly to heighten efforts against a rising tide of Islamophobia across the globe.

EU leaders are set to meet in Brussels Thursday for two days of discussions on tensions in the Eastern Mediterranean and relations with Turkey.

Turkish President Recep Tayyip Erdogan sent a letter to the leaders of EU countries reiterating Ankara’s call for dialogue with Greece amid tensions in the Eastern Mediterranean.

The US sees a “window of opportunity” for a dialogue between Turkey and Greece, US Secretary of State Mike Pompeo said in an interview with a Greek media outlet.

German Chancellor Angela Merkel has called for a balanced policy towards Turkey ahead of a key summit of EU leaders set to start Thursday.