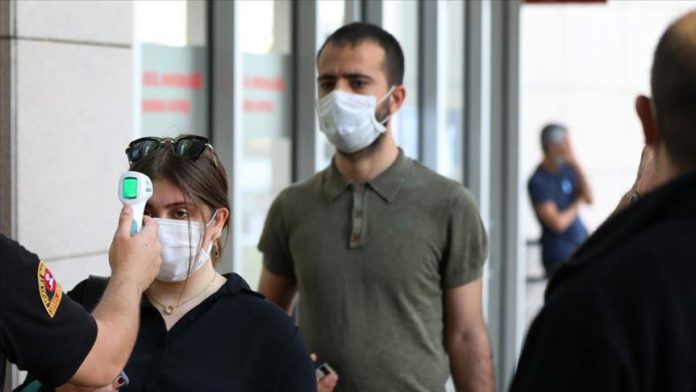 Turkish authorities announced 2,165 additional COVID-19 patients in the past 24 hours — the third straight day that number has topped 2,000.

As many as 115,979 new tests were conducted since Thursday, bringing the total to nearly 13 million. Meanwhile, the virus-linked death toll in Turkey reached 9,658, with 74 new fatalities.

The number of patients in critical condition now stands at 1,648.

A PKK terrorist, one of the perpetrators of a 2016 deadly terror attack in central Turkey, has been brought back to the country from Iraq in an operation by Turkish intelligence.

A permanent cease-fire agreement between Libya’s warring parties “does not seem to be reliable,” according to the Turkish president.

Ersin Tatar, the newly elected president of the Turkish Republic of Northern Cyprus (TRNC), was sworn into office.

NATO Secretary-General said Turkey and Greece canceled military exercises in the Eastern Mediterranean planned for next week to de-escalate tensions.

The World Health Organization (WHO) is looking at 10 vaccines in Phase 3 trials as the northern hemisphere, with skyrocketing cases, face a critical juncture in the fight against COVID-19, according to the chief scientist of the global body.

Spain registered 19,851 new cases, the second-highest daily jump, as several regions tightened restrictions and asked the government to declare a state of emergency so they can take even stricter measures.

Africa continued to maintain a more than 80% recovery rate with 1,387,022 patients having recovered, according to the Africa Centres for Disease Control and Prevention (Africa CDC).

Russia registered a new record in the daily cases — 17,340 people tested positive for COVID-19 during the past day.

Italy set a fresh record in new infections, topping 19,000 daily cases for the first time since the start of the pandemic.

A total of 20,530 more patients tested positive for COVID-19, raising the total to 830,998, according to British government data.

Sudan said Trump signed an official statement to take it off Washington’s list of state sponsors of terrorism.

Trump announced Sudan agreed to open full diplomatic relations with Israel, making it the third nation in recent months after Bahrain and the United Arab Emirates.

After one month of a partial lockdown of the Al-Aqsa Mosque, Palestinians flocked to the mosque to pray the first Friday prayer.

Israeli Prime Minister Benjamin Netanyahu and Defense Minister Benny Gantz said they will not object to the US sale of F-35 fighter jets to the United Arab Emirates (UAE).

Iran designated the US envoy to Iraq and other US officials in that country for “terrorist acts” against Iranian interests, a day after Washington sanctioned the Iranian envoy to Baghdad.