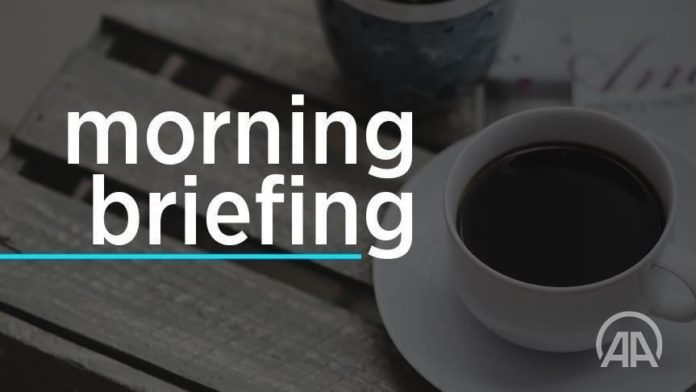 ANKARA – Anadolu Agency is here with a rundown of the latest developments on the coronavirus pandemic and other news in Turkey and around the world.

Turkey registered 1,723 new coronavirus patients in the past 24 hours, according to Health Ministry data.

The country’s overall tally now stands at 345,678, the ministry reported.

The Turkish president announced the discovery of an additional 85 billion cubic meters of natural gas in the Black Sea, following a historic find this summer.

Three PKK terrorists, including a wanted member, were neutralized in southeast Turkey, the Interior Ministry said.

Thirteen civilians were killed as more than 40 others were injured in Armenia’s missile attack on Azerbaijan’s second-largest city, Ganja.

“Silence in face of savagery means complicity in murder. Those who do not claim their share of humanity will be held accountable for their crimes,” Mevlut Cavusoglu said on Twitter.

Turkey slammed Greece for standing with the occupying country, Armenia, in the current conflict in the region with Azerbajijan.

Mainstream US media disregarded the Armenian strike on Azerbaijani civilians.

Prominent outlets such as The New York Times, The Wall Street Journal and CNN failed to carry the attack either in their main pages or world sections.

In a statement, the ministry said the Su-25 aircraft was attempting to launch air strikes on Azerbaijani positions in the Jabrayil region.

Across the world, COVID-19 has claimed more than 1.1 million lives in 189 countries and regions since last December.

More than 39.44 million cases have been reported worldwide, with recoveries exceeding 27.1 million, according to figures compiled by US-based Johns Hopkins University.

With 10,925 new cases, Italy reported the highest daily spike since the start of outbreak in the country, according to the Health Ministry.

Germany’s president went into quarantine after one of his bodyguards tested positive for COVID-19.

India’s coronavirus count crossed the 7.4 million mark after it registered 62,212 new cases, according to official statistics.

It has given a go-ahead for clinical trials of Russia’s Sputnik V coronavirus vaccine.

A total of 79 patients, including infants and children, were brought to Turkey for treatment upon the request of Iraqi authorities.

Hailed for her successful handling of the COVID-19 pandemic, New Zealand’s prime minister led her party to a historic second term.

Jacinda Ardern’s ruling center-left Labor Party won 64 seats, winning nearly 50% of total votes, the first time since 1996 that any party has won a clear majority to form a government on its own.