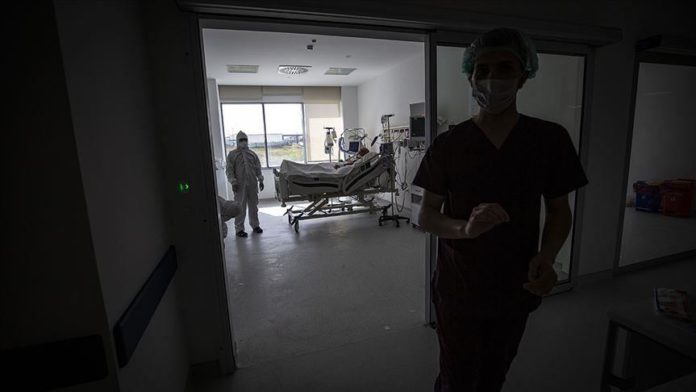 Turkey registered 2,311 coronavirus cases over the past 24 hours, according to Health Ministry data released Thursday.

The country’s overall tally now stands at 386,820, the ministry said.

Another 146,028 COVID-19 tests were carried out across the country, bringing the total to over 14.7 million.

A Turkish university administrated the first dose of a vaccine candidate for the novel coronavirus, namely ERUCOV-VAC, to a human volunteer Thursday.

“Application on humans that we call Phase 1 has started at Erciyes University. I guess it will be completed in 5 to 6 weeks,” said Turkish Health Minister Fahrettin Koca.

At least nine suspects in western Turkey thought to be involved in the construction of buildings that collapsed in a recent powerful earthquake were transferred to a courthouse Thursday.

A Turkish university announced scholarships Thursday for victims of Armenian attacks on Azerbaijan. Alim Yildiz, the president of Cumhuriyet University in central Sivas province, said they have been working to design a scholarship program for the children of the Azerbaijani martyrs.

Despite several cease-fires, the Armenian side on Thursday morning opened fire on civilian settlements in the Goranboy and Tartar regions, the Azerbaijani Defense Ministry said.

Azerbaijan on Thursday defused a Smerch missile fired by Armenia’s military which landed in the city of Tartar but did not explode.

Reeling from a devastating attack by Armenian forces, residents of Azerbaijan’s city of Ganja are combing through the rubble of their demolished homes to retrieve whatever is left intact.

People in the city, which was attacked by the Armenian army on Oct. 17 with mid-range ballistic missiles, killing 26 civilians, are trying to repair their houses as life limps back to normal after substantial gains by Azerbaijani forces.

Twitter suspended but later restored the account of Azerbaijan’s Foreign Minister Jeyhun Bayramov on Wednesday, without providing a reason.

Alarm bells are ringing in Europe as a second wave of the coronavirus pandemic has sent infections soaring to record levels in several countries.

Millions of Brits have started to stay at home as a second national lockdown to curb resurging coronavirus infections kicked in on Thursday.

Non-essential shops, pubs, restaurants and gyms will remain closed until the end of the lockdown on Dec. 2.

France reported a record daily number of new coronavirus cases Thursday, the highest number since the end of a national lockdown on May 11.

Spain reported the highest jump in new COVID-19 deaths since late April, with the Health Ministry confirming that 368 more lives were lost to the disease.

Germany registered 19,990 new cases Thursday, the biggest single-day spike in the country since the pandemic began.

Daily infections in India returned above the 50,000 mark Thursday, relapsing after a recent decline to under 37,000.

At least 26 people in Pakistan died from COVID-19 on Thursday amid the highest single-day spike over the past two months, said the country’s Health Ministry.

The pandemic has dealt a severe blow to key health services in Africa, raising fears that some of the continent’s main health problems are worsening, the World Health Organization’s Africa office said Thursday.

China has suspended the entry of UK and Philippines visa-holders and residents due to recent surges in COVID-19 cases.

The European Union called on Israel to stop demolishing Palestinian structures, including the ones funded by the 27-member bloc.

Kosovo’s President Hashim Thaci announced Thursday that he has resigned from his duties after a war crimes indictment prepared by the Kosovo Special Prosecutor in The Hague was accepted by the court.

The UN has expressed alarm over reported armed clashes in northern Ethiopia, calling for immediate measures to de-escalate tensions and ensure a peaceful resolution to the dispute.

Ethiopia’s lower house of parliament on Thursday approved a six-month state of emergency in its Tigray region.

Some 8,000 people have been killed in the Philippines’ controversial war on drugs since 2016, according to new government figures released Thursday.