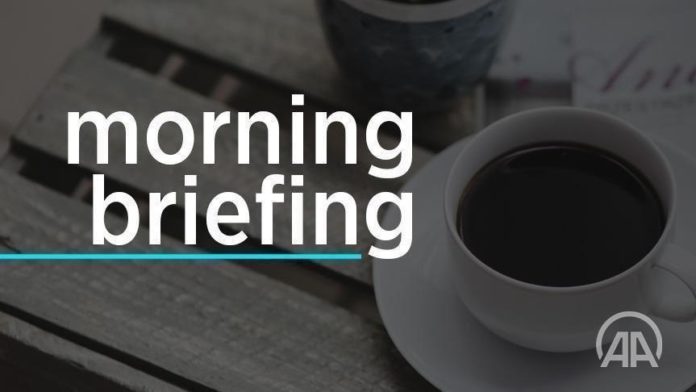 ANKARA  – Anadolu Agency is here with a rundown of the latest developments on the coronavirus pandemic and other news in Turkey and around the world.

Turkey registered 29,132 coronavirus infections over the past 24 hours, including 6,876 symptomatic cases, according to Health Ministry data released Thursday.

The new symptomatic cases raised the overall count to 474,606.

Turkey and Qatar signed 10 new deals Thursday at a joint meeting held at the presidential palace in Ankara.

A recent motion passed by French lawmakers calling on Azerbaijan to withdraw from the Upper Karabakh region, which Baku had liberated from occupation, is “ridiculous, biased and far from reality,” Turkey said Thursday.

The Turkish defense minister on Thursday slammed a so-called resolution in the French Senate urging the recognition of Nagorno-Karabakh as “a republic.”

A Turkish court in Ankara handed down aggravated life sentences Thursday to several military officers and civilians who helped plot and carry out the deadly 2016 coup attempt by the Fetullah Terrorist Organization (FETO).

Turkey is now seeing the light at the end of the tunnel in its fight against terrorism, the country’s interior minister said Thursday.

“A total of 892 terrorists were neutralized this year in Turkey,” Suleyman Soylu told Turkish legislators in the parliament’s planning and budget committee in the capital Ankara.

Italy on Thursday reported 822 new deaths related to the novel coronavirus as the number of daily fatalities remained close to the peaks seen in late March, when the country was the epicenter of the pandemic in Europe.

UK government data released Thursday showed there were 17,555 new COVID-19 infections over the past 24 hours across the country.

The new figures came as England prepares to leave a lockdown and enter tiered restrictions.

The Robert Koch Institute (RKI) reported 22,268 new coronavirus infections Thursday, which was above the seven-day average of 18,200 cases.

Local health authorities reported 389 more fatalities due to the virus, bringing the country’s official toll to 15,160.

Russia on Thursday registered the highest number of coronavirus cases and deaths since the start of the pandemic.

India has extended the suspension of all scheduled international commercial passenger flights until Dec. 31, an official order stated Thursday.

At least 332 people died of the novel coronavirus across Africa over the past day, the Africa Centres for Disease Control and Prevention said in an update Thursday.

– Other developments around globe

Sudan on Thursday declared three days of national mourning over the death of Sadiq al-Mahdi, a former Sudanese prime minister.

Indonesia’s minister for marine affairs and fisheries announced Thursday that he would step down after being named a suspect in an alleged graft case.

The last bastion of the Tigray People’s Liberation Front (TPLF), the city of Mekele and its surroundings, came under attack by the Ethiopian army Thursday.

This is the third and last phase of the central government’s operations that started on Nov. 4 in the restive northern region of Tigray after TPLF forces stormed the Northern Command of the federal army.

Nairobi suspends arrests due to COVID-19