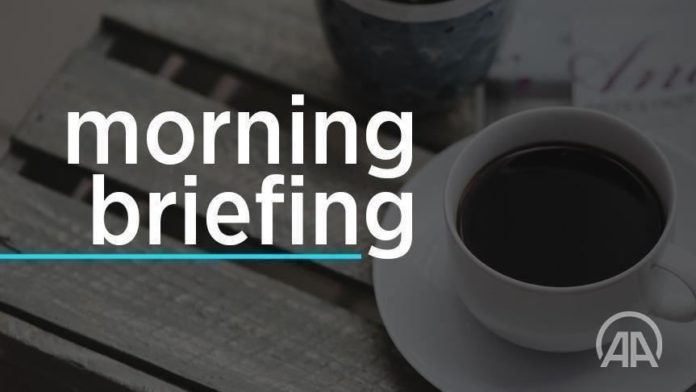 ANKARA – Anadolu Agency is here with a rundown of the latest developments on the coronavirus pandemic and other news in Turkey and around the world.

Turkey registered 7,381 coronavirus cases over the past 24 hours, according to Health Ministry data released Tuesday.

The new infections raised the overall count to 460,916.

Turkey’s main opposition leader Kemal Kilicdaroglu condemned Germany and Italy on Tuesday over the illegal search of a Turkish-flagged ship bound for Libya by an EU naval mission.

Ankara will respond to the search of a Turkish vessel by an EU naval mission as well as follow a judicial and political process, said Turkey’s foreign minister.

A German frigate’s armed search team boarded the Turkey-flagged vessel by force without consent of the flag state and captain, said the Turkish Defense Ministry.

The EU operation that stopped the Turkish ship Sunday supposedly to enforce a UN arms embargo was flawed from the start, according to the Turkish defense minister.

Germany on Tuesday defended an “unauthorized” search operation on a Turkish commercial ship off the Libyan coast which drew strong condemnation from Ankara.

In a phone call with Russian President Vladimir Putin, Erdogan said Armenia should not be allowed to evade responsibilities under its cease-fire deal with Azerbaijan

A wanted PKK terrorist was neutralized by Turkey’s National Intelligence Organization (MIT) in an operation in northern Iraq, a security source said Tuesday.

The UK on Tuesday reported 11,299 new COVID-19 cases, a figure signaling a weekly drop of over one-quarter.

Italy reported 853 fatalities related to the novel coronavirus — the biggest single-day rise since the end of March.

Spain suffered its deadliest day since mid-April in the novel coronavirus outbreak, with the Health Ministry reporting another 537 fatalities Tuesday.

Russia reported 491 new deaths from the novel coronavirus, the highest single-day rise in fatalities since the start of the pandemic, bringing the death toll to 37,031.

The number of active coronavirus cases in Africa to date stood at 323,258 as recoveries accounted for well over half the number of total cases, the Africa Centres for Disease Control and Prevention (CDC) said Tuesday in an update.

– Other developments around world

The Ethiopian Human Rights Commission (EHRC) said Tuesday that Tigrayan youth, supported by local security forces, had massacred at least 600 civilians in a town in the country’s north.

At least five civilians were killed and 18 others injured in a bomb blast Tuesday in northern Syria.

Attackers detonated an explosive-laden vehicle in al-Bab district of Aleppo province, causing multiple casualties, according to Anadolu Agency reporters on the ground.

Two people were killed Tuesday in a terror blast in northwestern Syria, according to the governorship of Hatay, a Turkish province along the border with Syria.

An explosives-laden vehicle exploded in the city center of opposition-held Afrin, leaving 17 others injured, the governorship said in a statement.

The Dow Jones Industrial Average hit a record 30,000 points for the first time after the US state of Pennsylvania certified Joe Biden as the winner of the 2020 presidential election.