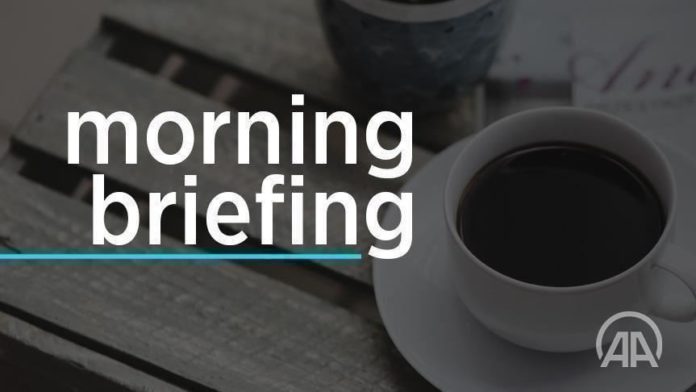 The death toll in Turkey from COVID-19 is now over 11,000, according to figures released by the Health Ministry.

Another 87 virus-related fatalities were reported in the country over the past 24 hours, raising the overall count to 11,059.

Residents who are 65 and older in Ankara and Istanbul have been restricted from leaving their homes except for certain hours as part of measures to stem the spread of the coronavirus, said local officials.

The elderly are allowed outside between 10 a.m. (0700GMT) and 4 p.m. (1300GMT) by observing social distancing guidelines and wearing masks, according to the provincial governor’s office.

The Republic of Turkey on Tuesday honored its founding father, Mustafa Kemal Ataturk, on the 82nd anniversary of his death.

Turkey has achieved great development since the establishment of the republic by its founding father Mustafa Kemal Ataturk and today is striving to become one of the most developed countries, said the Turkish president.

Turkey’s foreign minister said no plan excluding Turkey in the Eastern Mediterranean has any chance of succeeding and reiterated the country’s determination to defend its rights and interests in the region.

After Syria and Libya, Upper Karabakh constituted yet another failure for France, a French daily newspaper said Tuesday.

The speaker of Turkey’s parliament congratulated Azerbaijan for its recent victories in the Nagorno-Karabakh region.

Russian President Vladimir Putin said he hopes for lasting peace for both Azerbaijanis and Armenians.

“I hope these last steps we have taken will ensure long-term peace for the peoples of Azerbaijan and Armenia,” Putin said, speaking at a virtual summit of the Shanghai Cooperation Organization.

The Palestinian group Hamas congratulated Azerbaijan over the liberation of the Nagorno-Karabakh region from Armenian occupation.

Russia on Tuesday confirmed 20,977 new COVID-19 cases and 368 fatalities as authorities called for stricter measures to contain the spread of the novel coronavirus.

Teachers’ unions will strike across France to press their demands for the bolstering of health measures in schools in the midst of the coronavirus crisis.

Britain reported 532 new coronavirus fatalities over the past 24 hours, the highest number since mid-May.

A total of 35,098 coronavirus cases and 580 fatalities were registered in Italy over the past 24 hours, health authorities said Tuesday.

The number of new COVID-19 cases jumped again in Greece with 2,384 new infections Tuesday after seeing a decline in the previous two days.

Canadian drug company Medicago said it developed a vaccine that stimulates antibody and cellular immune responses against COVID-19 in 100% of trial participants.

US President Donald Trump claimed that the announcement of a COVID-19 vaccine was deliberately withheld before the 2020 election.

At least 66 local schools in southern China were closed and residents asked to stay in isolation for the next two weeks after two asymptomatic cases of the novel coronavirus were reported, according to local media.

Prominent Palestinian politician Saeb Erekat passed away Tuesday in an Israeli hospital after weeks-long suffering from a coronavirus infection.

A strong cooperation and alliance between Turkey and the US will continue to make a “vital contribution” to world peace, Turkey’s president said in a congratulatory message to US President-elect Joe Biden.

The Taliban in Afghanistan urged US President-elect Joe Biden to stay committed to the Doha peace accord with the group, which was signed during the Trump administration.

Israel’s parliament, or Knesset, approved the normalization agreement with Bahrain, according to Israeli media.

EU leaders discussed anti-terror measures in Europe in the wake of recent attacks in France and Austria.

The Western Balkans Summit was held in Bulgaria’s capital Sofia as part of the Berlin Process.

The Ethiopian government on Monday ruled out dialogue with “rebel forces” in the Tigray region until its “objectives” are achieved.

The sixth round of the 5+5 Joint Military Commission meetings between representatives from the Libyan Army affiliated with the legitimate Libyan government and forces aligned with strongman Khalifa Haftar began Tuesday in the city of Sirte.

Three men in Spain went on trial for their alleged role in the 2017 terror attacks in Barcelona and Cambrils which left 16 people dead and 140 others wounded.