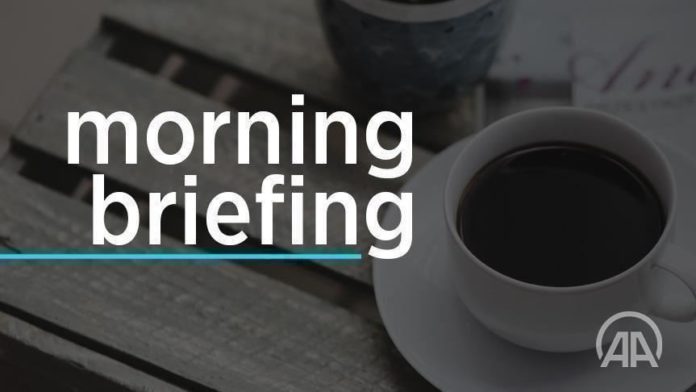 Turkey registered 2,576 novel coronavirus cases over the past 24 hours, according to Health Ministry data released Monday.

Turkey appointed Lutfi Elvan as the country’s new treasury and finance minister early Tuesday, according to a presidential decree published in the Official Gazette.

He has been serving as chairman of Parliament’s Planning and Budget Committee.

Azerbaijan’s president described a deal reached early Tuesday to halt fighting over the Nagorno-Karabakh region as the defeat of Armenia.

In a televised address, Ilham Aliyev announced the end of the Karabakh conflict between Baku and Yerevan with the new agreement.

Russian President Vladimir Putin announced the signing of the deal by Azerbaijan and Armenia earlier in the day.

Aliyev said Armenian Prime Minister Nikol Pashinyan signed the agreement due to Baku’s “iron fist,” not Yerevan’s own will.

He said the liberation of around 300 settlements in the region since Sept. 27 has weakened the Armenian army.

Meanwhile, Armenia’s prime minister said Tuesday it was “a very hard decision” to sign a deal to end the conflict in the Upper Karabakh region, also known as Nagorno-Karabakh.

In a statement on social media, Nikol Pashinyan said the decision was made after a deep analysis of the military situation and assessment by people with knowledge.

Armenia erupted in protests after Pashinyan admitted defeat by signing the deal with Azerbaijan and Russia to halt the fighting over Upper Karabakh.

Russian peacekeeping forces are en route to Nagorno-Karabakh for deployment there under a deal reached between Azerbaijan and Armenia, local media reported Tuesday.

“In order to control the cease-fire and the cessation of military actions in the Nagorno-Karabakh conflict zone, a Russian peacekeeping contingent is being deployed consisting of 1,960 servicemen, 90 armored vehicles, 380 units of vehicles and special equipment,” the Russian news agency TASS reported, citing the Defense Ministry.

US drugmaker Pfizer and German biotech firm BioNTech announced Monday that their COVID-19 vaccine candidate is more than 90% effective against the novel coronavirus.

The pharmaceutical firms said in a statement that their vaccine candidate “has demonstrated evidence of efficacy against COVID-19 in participants without prior evidence of SARS-CoV-2 infection.”

The study had 43,538 participants with 42% from diverse backgrounds and analyzed 94 confirmed COVID-19 infections with no serious safety concerns observed.

Meanwhile, Monday brought good news for France as the number of coronavirus infections in the country once again dropped by around half.

In another positive sign, medical experts reported Monday that intensive care admissions have fallen over the past week.

The World Health Organization head and its chief scientist on Monday applauded announcements by Pfizer and BioNTech that final stage trials of their vaccine have proven 90% effective in preventing COVID-19 infections.

“We welcome the encouraging vaccine news from @pfizer & @BioNTech_Group & salute all scientists & partners around the world who are developing new safe, efficacious tools to beat #COVID19,” WHO Director-General Tedros Ghebreyesus tweeted.

US President-elect Joe Biden announced Monday the launch of a group of public health experts to advise him on how best to rein in the coronavirus pandemic.

“This group will advise on detailed plans built on a bedrock of science and keep compassion, empathy and care for every American at its core,” Biden said during a news conference.

“It’s time to put aside the partisanship and the rhetoric that is designed to demonize one another. It’s time to end the politicization of basic responsible public health steps like mask-wearing and social distancing,” he added.

US: Weinstein heads to court as new charges unsealed