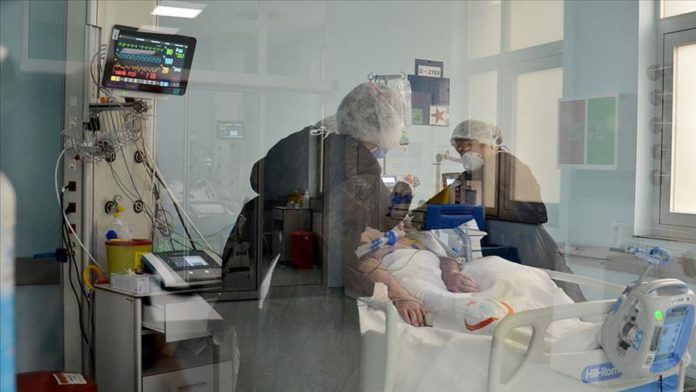 Turkey registered 2,436 more novel coronavirus cases in the past 24 hours, according to Health Ministry data.

Turkey “neutralized” at least 120 terrorists in countrywide operations in October, according to the Interior Ministry.

Foreign Minister Mevlut Cavusoglu said France censoring a cartoon of its Education Minister Jean-Michel Blanquer is an example of “hypocrisy” and “double standard.”

To date, Azerbaijani President Ilham Aliyev announced more than 200 villages, as well as several settlements and cities of Azerbaijan, have been liberated from Armenian occupation.

In a statement, the ministry said mortar firing points in the occupied village of Goyark in the Tartar city were destroyed by “the precise strike of our units.”

Starting from early morning, Armenian Armed Forces have attacked Tartar, as well as Gazyan and Husanli villages of the region, a ministry statement said.

The Tapgaragoyunlu village in Goranboy region was also shelled by Armenian forces, said the statement.

The government began a mass testing pilot scheme in Liverpool.

France on Friday recorded its highest number of coronavirus infections with 60,486 cases recorded in a single day, the country’s Health Ministry said.

Cases and fatalities were at an all-time high as the first week of a lockdown comes to close.

Italy on Friday registered 37,809 cases in the past 24 hours, the highest single-day rise since the beginning of the pandemic, according to health authorities.

Japan’s prime minister on Friday called for caution amid “signs of coronavirus spread,” a day after daily infections there topped 1,000 for the first time since late August.

COVID-19 cases and virus-related deaths in Russia have reached their highest levels since the beginning of the pandemic.

The Palestinian Prisoners Society confirmed his decision in an official statement saying Israeli authorities will release him Nov. 26.

On the back of anticipated US presidential election news, Japan’s Nikkei 225 index hit a nearly three-decade high.

“Whoever is elected [in the US], Turkey will approach the new American administration in the same way it approaches any other country,” Turkish Foreign Minister Mevlut Cavusoglu said of the 2020 presidential election in the US as the vote count continues.

In what may be one of the last bricks in building a presidential electoral victory, Democratic candidate Joe Biden took a slim lead in Georgia over President Donald Trump, even as vote tallies nationwide face numerous legal challenges.

Democratic presidential nominee Joe Biden pulled ahead of US President Donald Trump in the state of Pennsylvania, bolstered by mail-in ballots.

The US state of Georgia will hold a vote recount because of the incredibly narrow margin separating the candidates, its secretary of state announced.