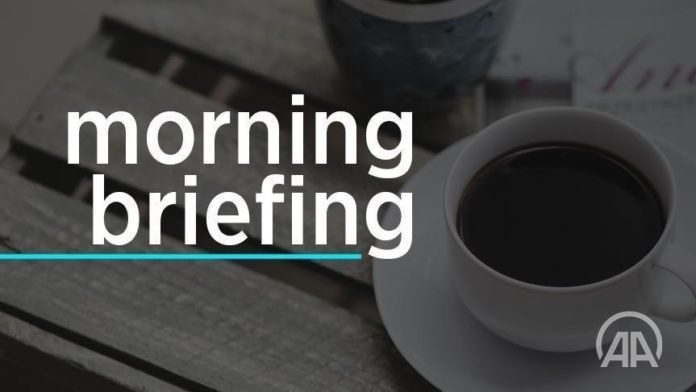 Turkey has administered over 116.48 million doses of COVID-19 vaccines since it launched an immunization drive in January, according to official figures released.

Nearly 55.43 million people have been given a first vaccine dose, while over 48.75 million are fully vaccinated, the Health Ministry said.

Turkey has also given third booster shots to some 11.17 million people.

Meanwhile, the ministry recorded 28,678 new coronavirus cases, 217 related deaths and 29,296 recoveries over the past day.

More than 900,000 people signed a viral open letter from climate activists Greta Thunberg, Vanessa Nakate, Dominika Lasota and Mitzi Tan demanding leaders “face up to the climate emergency” at the launch of the leaders’ summit of the 26th session of the Conference of the Parties (COP26) to the United Nations Framework Convention on Climate Change.

The Caucasus region, with its rich nature, has lost 40% of its glaciers due to climate change, Georgian Prime Minister Irakli Garibashvili said.

Australia said it has recognized China’s Sinopharm vaccine for those traveling to the country.

The number of people who have died from the coronavirus has exceeded 5 million worldwide in less than two years, according to Johns Hopkins University.

Bangladesh began COVID-19 vaccination for schoolchildren aged 12 to 17 years in the capital Dhaka for the first time.

As France continues to emerge from a pandemic that held the country in its grip over the past year and a half, notable changes, both financial and societal, are helping bring the country back to a state of normalcy, with Nov. 1 as their starting point.

Greece registered 5,449 new coronavirus cases in the past 24 hours, its highest daily figure since the beginning of the pandemic, the National Public Health Organization said.

Other developments across the world

Tunisian authorities rescued a total of 125 irregular migrants off the coast of Tunisia, according to the country’s Interior Ministry.

Mass shootings broke out across the United States during the Halloween weekend, leaving at least 12 people dead and 52 injured.

Communist militant group leader Jorge Madlos has been killed by the Philippines military.

France stepped back in its row with the UK over post-Brexit fishing rights and ruled out imposing planned sanctions from midnight as Britain has signaled moving constructively on the fishing licenses.

Iraq announced Monday that it recently paid US$490 million in war reparations to Kuwait.