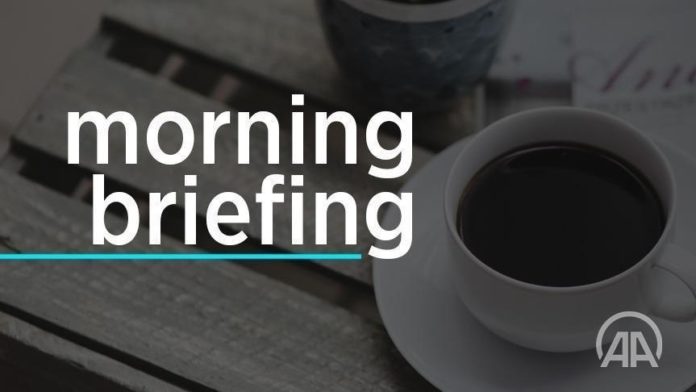 Turkey has administered over 116.28 million doses of COVID-19 vaccines since it launched an immunization drive in January, according to official figures released Sunday.

Nearly 55.4 million people have been given a first vaccine dose while over 48.65 million have been fully vaccinated, the Health Ministry said.

Separately, the ministry recorded 23,948 new coronavirus cases, 201 related deaths and 26,174 recoveries over the past day.

US President Joe Biden showed a “positive attitude” about the sale of F-16 fighter jets to Turkey, Turkish President Recep Tayyip Erdogan told a news conference Sunday at the G20 summit in Rome.

“The issue of modernizing the F-16s we have or giving new F-16s came to the fore [during the meeting with Biden]. Our defense ministers are following the process,” Erdogan told reporters.

Earlier in the day, the Turkish and US leaders held a closed-door meeting which lasted over an hour.

Turkish President Recep Tayyip Erdogan also met with the leaders of France, Germany and the European Council on the sidelines of the G20 Rome summit.

At least two people with suspected links to the Daesh terrorist organization, also known as ISIS, were arrested in Turkey during a police operation in the metropolis Istanbul.

North Macedonia’s prime minister stepped down Sunday night after his party failed to win in local elections. Zoran Zaev announced his resignation at the headquarters of his Social Democratic Union of Macedonia (SDSM) party in the capital Skopje.

NATO is reluctant to establish a dialogue with Russia, Russian Foreign Minister Sergey Lavrov said Sunday at a press conference following the G20 summit in Rome.

“We have no information about what NATO is going to do. We rely on facts, and these facts suggest that NATO does not wish any interaction with us,” he said, when asked whether NATO had sent any signals to Russia on establishing dialogue.

French President Emmanuel Macron and British Prime Minister Boris Johnson met Sunday to discuss the hot-button issue of fishing rights in the English Channel that has plagued the two countries over the past few weeks.

The 30-minute meeting on the sidelines of the G20 summit in Rome had the two leaders vowing that practical and operational measures will be taken as quickly as possible to avoid a rise in tensions and that they would bring forth a “de-escalation” in the situation, according to a statement by the Elysee Palace.

The United Nations Climate Change Conference, also knowns as COP26, began in Glasgow, Scotland on Sunday with new pledges expected to be announced in the fight against climate change.

“We have no choice but to make COP26 a success. For that, we need unity of purpose,” said Patricia Espinosa, the executive secretary of the United Nations Framework Convention on Climate Change.

The World Meteorological Organization (WMO) released its provisional report on the State of the Global Climate 2021 on the opening day of the 26th session of the Conference of the Parties (COP26) to the United Nations Framework Convention on Climate Change, which will be held in Glasgow, Scotland until Nov. 12.

The past seven years are on track to be the warmest on record, with the global sea level rise accelerating since 2013 to a new high in 2021, the WMO’s latest report revealed.

“Through the mediation of tribal elders in Kot and Batkot districts of Nangarhar province, 65 Daesh militants surrendered to the Islamic Emirate (Taliban) through the intelligence department and expressed remorse for their past actions,” said a statement issued by the provincial administration in Nangarhar.