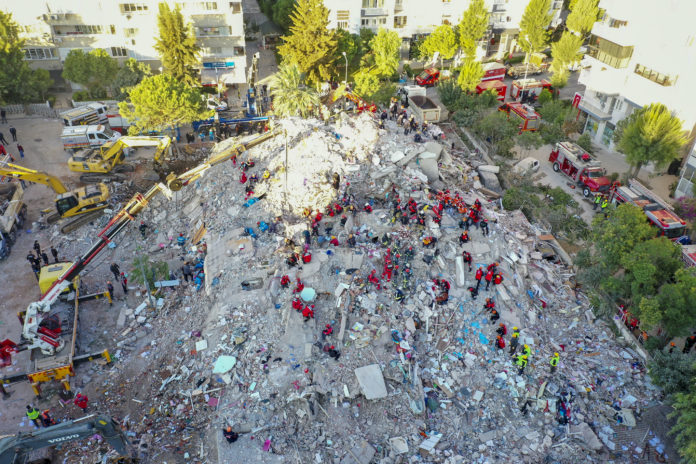 Following the magnitude-6.6 earthquake, at least 39 people were killed and 896 injured in Izmir and in neighboring provinces, according to the Disaster Management Agency Authority (AFAD).

A total of 667 of 896 victims have been discharged from hospitals while 229 are still under treatment, it said.

At least 712 aftershocks, with 40 more powerful than magnitude-4.0, have been recorded.

The country’s overall tally now stands at 375,367, the ministry reported.

Turkey’s presidential spokesman Ibrahim Kalin was diagnosed with the coronavirus and reached the final stage of treatment Saturday.

Turkey’s Interior Minister Suleyman Soylu and his family are under treatment in a hospital after testing positive for COVID-19.

Turkish President Recep Tayyip Erdogan thanked all countries for their messages of support after the earthquake in Izmir. He asserted that all of Turkey’s institutions have been mobilized to support its citizens and the country is ready to handle the situation.

Turkish forces neutralized six YPG/PKK terrorists in northern Iraq. The terrorists were detected through reconnaissance and surveillance in the Gara and Harkuk regions and neutralized in air operations.

British Prime Minister Boris Johnson announced on Saturday in a news conference that a month-long national lockdown in England will become effective on Nov. 4 to last until Dec. 2.

France on Friday entered the second national lockdown imposed to stem the spread of the novel coronavirus.

Greece saw another negative record in COVID-19 cases Saturday with 2,056 new infections, the highest daily number since the start of the pandemic in February.

OSCE Minsk Group’s co-chairs reported that Armenia and Azerbaijan agreed in Geneva not to deliberately target civilian populations or non-military objects in accordance with international humanitarian law in a conflict in Upper Karabakh.

US President Donald Trump will attend a total of 14 rallies during the final three days of his campaign for the 2020 presidential election next Tuesday, his campaign announced Friday.

An unidentified arsonist attempted to set fire to a mosque in Chateaudun, France. An official said someone started a fire but it was extinguished without growing. There were no casualties.

Tunisian security forces on Saturday arrested a man for claiming responsibility of the knife attack in the southern French city of Nice.

At least seven children were killed and several seriously injured after a separatist group attacked the school in Kumba, South West Region of Cameroon.

Libyan Prime Minister Fayez al-Sarraj said he took back his decision to resign at the end of October. Sarraj will remain in office until the ongoing intra-Libyan political dialogue talks come to an end.

Turkey ready to be 'base' for 4th industrial revolution