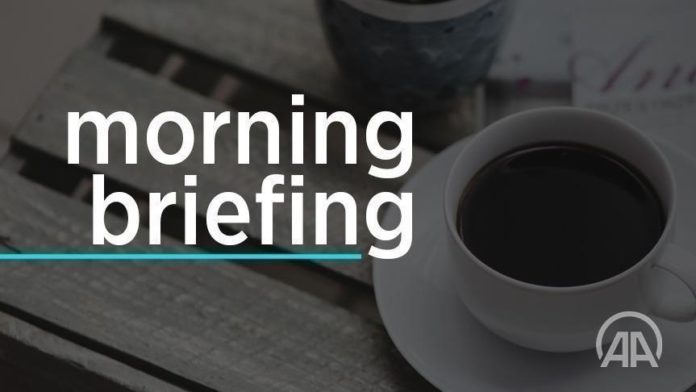 Turkey has administered over 47.2 million doses of COVID-19 vaccines since it launched a mass vaccination campaign in mid-January, according to official figures released Sunday.

More than 32.4 million people have received their first doses while over 14.8 million have been fully vaccinated, the Health Ministry’s count showed.

Turkey’s overall case tally is now over 5.4 million, while the nationwide death toll has reached 49,576 with 52 new fatalities.

Turkey on Sunday announced a further easing of COVID-19 restrictions from July 1 as part of a gradual normalization from the outbreak.

One forest worker died while helping firefighters battle a forest fire that erupted Sunday in Turkey’s Mugla province. The fire was later brought under control.

Turkish Foreign Minister Mevlut Cavusoglu met separately Sunday with his Canadian and Lithuanian counterparts Marc Garneau and Gabrielius Landsbergis in Rome, where he was attending a meeting of the Global Coalition to Defeat Daesh/ISIS.

Turkey announced Sunday that it has discovered 11 new hills around the famed ancient site of Gobeklitepe in southeastern Sanliurfa province.

Over 2.92 billion doses of coronavirus vaccines have been administered so far worldwide, figures compiled by Our World in Data, a tracking website, showed Sunday.

Bangladesh registered 119 coronavirus-related deaths Sunday, the biggest single-day jump since the pandemic hit the country, prompting calls for caution from experts as the third wave has unfolded.

At least 20 people were killed and scores of others wounded in a suicide attack by the al-Qaeda affiliated terrorist group al-Shabaab on forces in central Somalia’s Galmudug region on Sunday morning followed by a gunfight between them in the Mudug region.

Egypt’s President Abdel-Fattah al-Sisi arrived in the Iraqi capital Baghdad on Sunday for the first visit by an Egyptian leader to Iraq in three decades.

Armenian soldiers violated last year’s peace deal and opened fire on Azerbaijani military posts at the border near the Kalbajar region, according to a statement released Sunday by Azerbaijan’s Defense Ministry.

At least seven people, including a child, were killed and nearly 50 others wounded when an explosion rocked a three-story building in Bangladesh’s capital Dhaka Sunday night, according to the fire brigade.

At least 272 police officers in Germany are being investigated over their alleged links to far-right groups or for committing far-right crimes, local media reported Sunday.

The US military carried out airstrikes late Sunday on facilities used by Iran-backed militia groups in the Iraq-Syria border region, said the Defense Department.