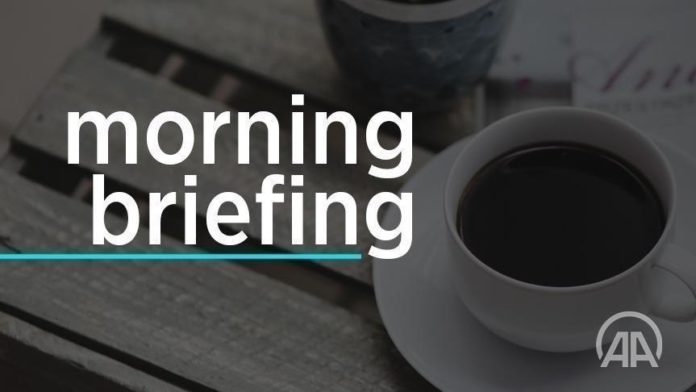 Turkey administered more than 46.84 million coronavirus vaccine doses since it launched a mass vaccination campaign in January, according to official figures.

The country’s overall case tally is now more than 5.4 million, while the nationwide death toll stands at 49,524 with 51 new fatalities.

As many as 7,402 more patients won the battle against the virus, taking the number of recoveries past 5.26 million.

Turkey extended condolences for a deadly building collapse in the US state of Florida.

One more family joined an ongoing sit-in protest against the PKK terror group in southeastern Turkey.

Turkey’s university entrance exams began with millions of hopeful students putting pencil to paper. The process is due to end Sunday.

UK Minister for European Neighborhood and the Americas Wendy Morton is set for a three-day visit to Turkey, according to an official statement.

Bangladesh registered 77 additional deaths from the coronavirus, taking the death toll to 14,053 with new hotspots outside the capital, Dhaka, particularly in border districts along India.

Britain’s Health Secretary Matt Hancock resigned after he was caught breaking coronavirus rules by hugging and kissing an aide.

Pakistan decried an international money watchdog’s decision to keep the country on its gray list, insisting there is no justification for the move.

More than 22,000 Yemenis have been displaced by violence in central Marib province, according to the UN.

The UN human rights chief is “outraged” at the “brutal murder” of three medical aid workers of Medecins Sans Frontieres, or Doctors Without Borders, in Ethiopia’s restive Tigray region.

The Turkish Republic of Northern Cyprus blasted remarks by an EU leader seeking to block a two-state solution for the island.

Official negotiations on the Cyprus issue can start only after the recognition of the sovereign equality of the Turkish side, according to Turkish Cypriot President Ersin Tatar.

Palestinian group, Hamas, said it will not accept any delay in the reconstruction of the Gaza Strip or lifting the years-long blockade following Israel’s bombardment last month of the seaside territory.

A heatwave that hit Greece earlier this week is expected to reach its peak with temperatures reaching 43 C (109 F), according to weather officials.

Iran said the 2015 nuclear deal can be revived during Vienna talks, but ruled out indefinite negotiations.

The Sudanese government will hand over ousted President Omer al-Bashir and former leading members of his government to the International Criminal Court (ICC), according to an official.

German police attacked protestors in Dusseldorf with batons and beat two journalists, according to the German News Agency.

Another body was found in the rubble of a collapsed building in the US state of Florida, bringing the death toll to five.