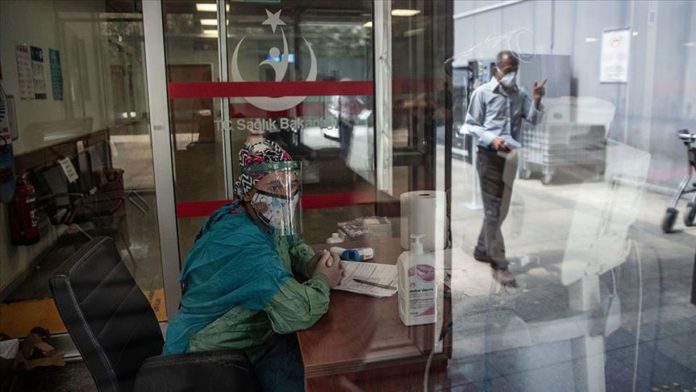 The Health Ministry announced that 179,831 people have recovered from the illness so far, while the death toll reached 4,825 with 18 more fatalities.

Healthcare professionals conducted 42,032 tests for the virus in the past 24 hours, raising the total number to more than 2.67 million.

Currently, 722 patients are being treated in intensive care, the ministry data showed.

Turkey’s ruling party spokesman reiterated that the country stands by the Sarraj government and Libyan brothers.

A magnitude 5.6 earthquake jolted Turkey’s eastern province of Bingol, according to the nation’s disaster agency. This is the second earthquake to hit the area within 24 hours after at least one person was killed and 18 others injured on Sunday amid 5.7-magnitude tremors in the same district.

The US has the highest number of cases with more than 2.1 million, followed by Brazil, with over 888,000.

The death toll in India due to the virus exceeded 9,500 as of Monday morning with 11,502 more infections and 325 fatalities in the last 24 hours.

Pakistan said it has identified 20 big cities with potential hotspots for the pandemic, which has already infected 144,478 people across the country.

In the UK, non-essential retail shops opened for the first time since the lockdown began, while another 38 people died of the virus across the country.

China has locked down 11 residential communities in Beijing following a fresh outbreak of the novel coronavirus in the country’s capital.

As Spain welcomed its first group of tourists Monday since the virus lockdown began, the country reported the lowest number of daily infections in the last three months. Just 40 new cases were diagnosed on Sunday, according to new Health Ministry data.

France reported 30 more fatalities, a double-digit rise from the previous day. The death toll nationwide has risen to 29,436.

The number of cases in Africa surpassed 242,000 with at least 6,400 people dying so far across the continent.

In South Africa, where schools were reopened earlier this month, 98 teachers and 1,800 students have been infected by COVID-19.

The UN Human Rights Council said Monday it has decided to discuss as a matter of urgency racism and police violence in the US after a request from African countries.

Dozens of American Muslim organizations joined Monday in demanding changes to policing practices in the US.

British Prime Minister Boris Johnson announced in an article an inquiry into racism following Black Lives Matter protests around the country, but the move drew criticism.

US President Donald Trump alleged the news media is trying to “shame” him over his decision to hold election rallies as the US continues to grapple with the coronavirus pandemic.

The body of a pilot has been found in the North Sea after a US F-15 crashed off the coast of Yorkshire. The F-15C Eagle aircraft took off from the RAF Lakenheath airbase in Suffolk and crashed on a training mission.