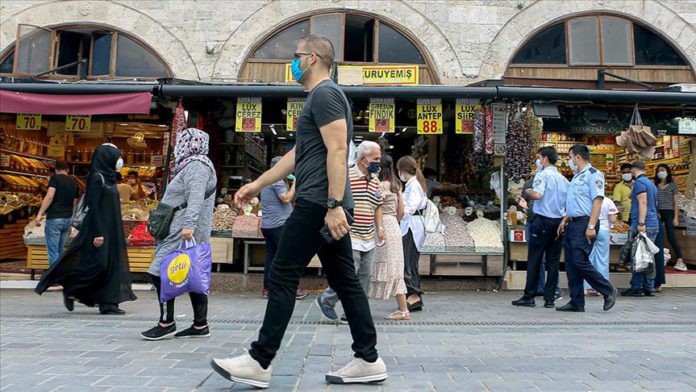 Turkey announced 2,219 more recoveries from the novel coronavirus over the past 24 hours, bringing the tally to 187,511, according to Health Minister Fahrettin Koca.

The country’s death toll from the virus rose to 5,282 as it reported 22 new fatalities.

Healthcare professionals conducted 49,300 tests for the disease in the past day, raising the total count to over 3.78 million.

US coronavirus cases surpassed 3 million Wednesday, according to a running tally by Johns Hopkins.

The Maryland university’s tally counted 3,054,650 confirmed infections and 132,298 fatalities in the US, while 953,420 people have recovered from the disease since it first appeared.

The number of coronavirus cases in Russia crossed 700,000 on Wednesday, while daily growth continued to hover at 6,000-plus for the 13th day in a row.

In the last day, another 6,562 infections were confirmed in the country, taking the tally to 700,792 with 217,614 active cases, 31% of the overall count, the country’s emergency task force said in its daily report.

COVID-19 infections in Africa surpassed half a million Wednesday, said the World Health Organization (WHO), expressing concern as more countries in the continent are experiencing a sharp rise in cases.

The region of Catalonia will make masks mandatory in all public spaces, said the regional president, as cases there continued to climb.

Thousands of protesters took to the streets of Serbia’s capital again after the government moved to impose new measures to curb a rise in coronavirus cases.

A local queen in South Africa died due to COVID-19.

Turkey will not allow any terror activities by the YPG/PKK in northern Syria, the country’s National Defense Ministry said.

Also, at least 34 suspects were arrested in Turkey for suspected links to the Fetullah Terrorist Organization (FETO), the group behind the 2016 defeated coup in the country.

The YPG/PKK terrorist group last week kidnapped four more children in northern Syria, including two girls, and recruited them by force, according to local sources.

A German-Turkish mother continued her protest outside the German Chancellery to demand the return of her daughter, who was forcibly recruited by PKK terrorists.

Turkey criticized the US on Wednesday for including Greek Cyprus in its International Military Education and Training Program.

The Turkish Republic of Northern Cyprus (TRNC) also criticized the US for including Greek Cyprus in the program.

The UN Security Council voted down a Russian draft resolution Wednesday that sought to extend cross-border aid to Syria for six months through one border gate.

Ivory Coast Prime Minister Amadou Gon Coulibaly died in the city of Abidjan, according to a press release from the country’s presidency.

Turkey and the UK are in agreement on a diplomatic solution in Libya, said Turkey’s foreign minister.

Turkey will open a consulate in Manchester to provide quality services to Turkish citizens.

China inaugurated an office in Hong Kong to place national security agents there as part of the new security law for the semi-autonomous region, local media reported.