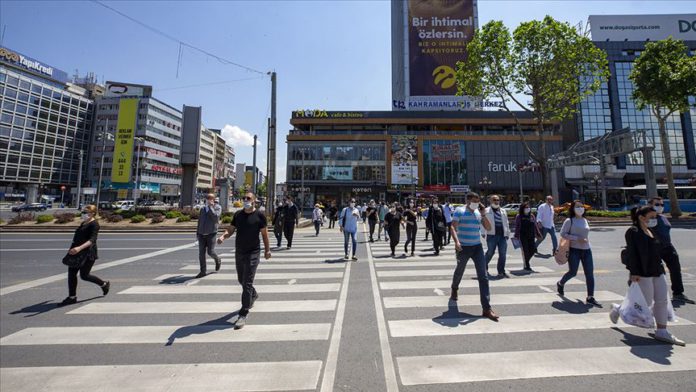 Turkey on Monday confirmed 982 more recoveries from the novel coronavirus, bringing the tally to 210,469.

The country’s health minister said 919 people had contracted COVID-19 over the last 24 hours, bringing the total number to 227,019.

Fahrettin Koca said the number of patients in intensive care rose in the last three days in Istanbul, the capital Ankara, central Konya, and the southern Gaziantep and eastern Diyarbakir provinces, while the country’s death toll from the disease rose to rose to 5,630, with 17 new fatalities.

“The reopening of Hagia Sophia for worship is not one-upmanship against any country or belief,” Mevlut Cavusoglu told a joint press conference with his Spanish counterpart Arancha Gonzalez Laya in the capital Ankara on Monday.

While protests against last week’s Hagia Sophia Mosque reopening continue in Greece, Evangelos Papanikolaou, the priest at Analipseos Church in Rafina near Athens, said in a speech that during the Ottoman era Turks protected many churches in Greece and did not shut them down.

Turkey is not just a partner but a NATO ally, Spanish Foreign Minister Arancha Gonzalez Laya told Anadolu Agency during a visit to the capital Ankara.

In a phone call, Turkish President Erdogan and his Russian counterpart Vladimir Putin spoke about a variety of issues, including bilateral relations and developments in the region.

Archeologists unearthed a 1,700-year-old statue of a female from the Hellenistic period in the ancient city of Perge, modern-day Antalya on the Turkish Mediterranean.

The armed forces of Turkey and Azerbaijan are set to conduct large-scale joint military exercises in Azerbaijan, the latter’s Defense Ministry said.

Since originating in China last December, COVID-19 has claimed over 652,000 lives in 188 countries and regions.

More than 16.4 million cases have been reported worldwide, while some 9.53 million patients have recovered, according to figures compiled by the US’ Johns Hopkins University.

The US on Monday surpassed 4.27 million coronavirus cases as cases spike in the country while 147,303 COVID-19-related deaths were recorded, according to a running tally compiled by Johns Hopkins University. It reported 1.3 million recoveries.

The National Institutes of Health announced that phase-three trials began on Monday of a candidate vaccine against the novel coronavirus in the US, with an expected enrollment of 30,000 volunteers.

In Brazil, the second worst-hit country after the US, 555 more people died since Sunday, bringing the death toll to 87,004

In Mexico, 306 patients died of virus-related complications, bringing the death toll to 43,680.

In Belgium, the number of COVID-19 patients treated in intensive care units rose 52% compared to last week, according to data from public health institute Sciensano.

Pakistan reported its lowest single-day fatalities due to coronavirus since May, with 20 fatalities bringing the nationwide death toll to 5,842.

The total number of coronavirus cases in Southeast Asian countries reached 246,536 on Monday, including 7,001 fatalities and 142,811 recoveries.

Saudi authorities announced the arrival of Muslim pilgrims to the holy city of Mecca for the annual Hajj pilgrimage. The Ministry of Islamic Affairs made preparations to welcome the pilgrims in accordance with health protocols to stem the virus’ spread.

Developments around the globe

Germany on Monday opposed Russia’s return to the G7 group of nations, amid US President Donald Trump’s proposal to invite Russian President Vladimir Putin to the group’s next summit.

Hezbollah carried out an attack against Israeli targets on Lebanon’s southern border. Earlier, Israel announced that a security incident had taken place on the border, without giving further details.

Afghan forces said to take back key district from Taliban

Turkish politician dies due to coronavirus