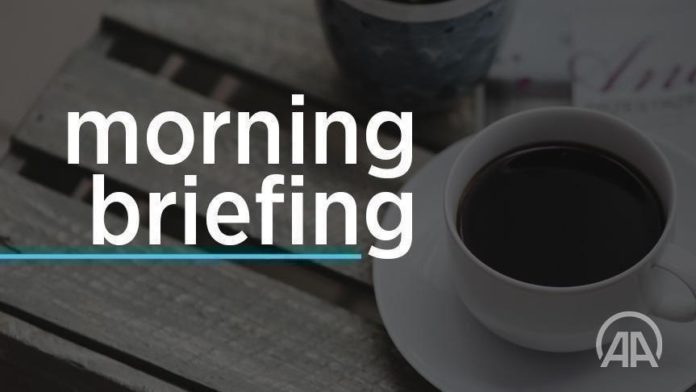 Turkey has administered nearly 63.8 million doses of COVID-19 vaccines since it launched a mass vaccination campaign in January, according to official figures.

According to Health Ministry data, over 39 million people have gotten their first dose, while over 21.14 million have received their second dose.

To date, over 62.68% of the adult population has received at least one vaccine dose. The ministry also confirmed 8,780 new infections and 46 coronavirus-related deaths in the last 24 hours, while as many as 4,561 more patients recovered.

Turkey’s President Recep Tayyip Erdogan said Ankara is considering operating a major airport in Afghanistan and it is ready to discuss the Afghan peace process with the Taliban.

Turkey condemned a meeting between French President Emmanuel Macron and members of the so-called Syrian Democratic Council, which is under the control of the YPG/PKK terrorist group.

Turkey’s Foreign Ministry said that a statement by the European Union’s foreign policy chief on the Turkish president’s recent visit to the Turkish Republic of Northern Cyprus (TRNC) is fresh proof of the bloc’s disconnect from the truth on the Cyprus issue.

More than 3.66 billion doses of coronavirus vaccines have been administered worldwide, according to Our World in Data, a tracking website affiliated with Oxford University.

The US Centers for Disease Control and Prevention (CDC) announced that the Delta variant of the coronavirus accounts for 83% of new cases, up significantly from two weeks ago as deaths spike.

A fully vaccinated White House staffer has tested positive for the coronavirus, the executive mansion announced, in one of the most high-profile “breakthrough cases” to date.

Tunisia’s premier sacked the country’s health minister after a collapse in the health care system due to surging cases of COVID-19.

Billionaire Jeff Bezos and a crew that included an 81-year-old former astronaut-in-training and a Dutch teen whose father paid for the flight completed a successful launch to the edge of space from the US state of Texas.

Mali’s interim President Assimi Goita was targeted in an attempted stabbing attack at the Grand Mosque in the capital Bamako.

India has reported a total of 45,374 cases of a fungal infection known as mucormycosis and 4,332 related deaths, said the country’s Health Ministry.

The prosecution authority in France opened an investigation into a Pegasus software case based on a complaint by journalists for alleged spying by Moroccan intelligence services.