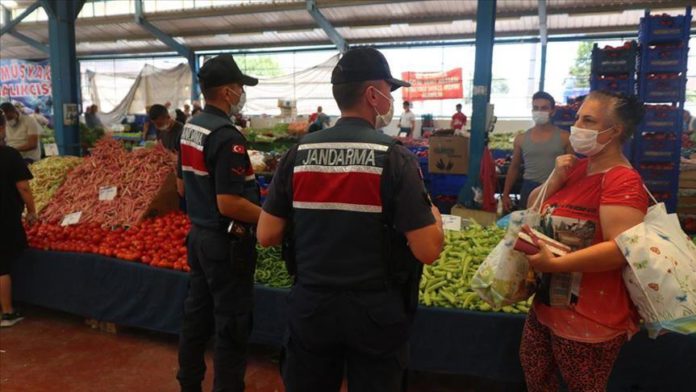 The health minister announced 1,179 additional recoveries Saturday from coronavirus in the past 24 hours, bringing the tally to more than 201,013.

The nationwide count of infections rose to 218,717, as 918 more cases were reported in the past 24 hours, Fahrettin Koca wrote on Twitter, citing health ministry data.

The US protects and gives support to the Fetullah Terrorist Organization (FETO), the group behind the 2016 defeated coup in Turkey, said the head of Turkish parliament’s constitutional committee.

Four more bodies were recovered from a lake in eastern Turkey where a boat sank late last month that was carrying dozens of irregular migrants.

The pandemic has killed more than 601,200 worldwide, with more than 14.2 million confirmed cases, according to figures compiled by US-based Johns Hopkins University.

The number of recoveries from the virus across the globe neared the 8 million mark.

Afghanistan reported 60 cases, its lowest daily count in the past three months.

An estimated 25 million people in Iran have contracted the virus in the past five months, with 14,000 deaths, the Iranian Health Ministry said. It warned that another 30 – 35 million are likely to be affected in coming months.

More than 2,700 more infections have taken the number of cases in Bangladesh past the 200,000 mark, officials said.

Meanwhile in India, at least 653,751 people have recovered from COVID-19, according to health ministry data, pushing the recovery rate to nearly 63%.

The outbreak reached a “plateau” in Brazil, the World Health Organization said, urging the South American nation to take advantage of “an opportunity” to control contagion.

South Africa’s health minister said the recommended isolation period for patients with confirmed infections has been reduced from 14 to 10 days.

The Hamtramck City Council in the US state of Michigan became the fifth city in the country to denounce India’s new citizen act, saying it discriminates against Muslims, according to media reports.

The Rwanda Investigations Bureau (RIB) paraded 57 suspects arrested in the Democratic Republic of Congo, who are accused of terrorism and forming an armed group to destabilize Rwanda.

Tension is mounting between Egypt and Ethiopia regarding their failure so far to reach agreement on a mechanism to fill and operate the Grand Ethiopia Renaissance Dam, or GERD.

Amid Syria’s devastating civil war, Russia and China’s UN Security Council vetoes to help the Assad regime have caused the deaths of “nearly a quarter of a million Syrians and the arrest of nearly 150,000 others,” according to a human rights group.

Leaders of Muslim communities around the globe are welcoming Turkey’s decision to make Istanbul’s iconic Hagia Sophia a mosque again and congratulating President Recep Tayyip Erdogan on the move.

Tensions continue to rise at the Armenian-Azerbaijani border amid serious cease-fire violations by Armenian troops after they attacked a northwestern border area with artillery fire.

Furthermore, People in Hungary and Austria took to the streets to protest Armenia’s cross-border attacks on Azerbaijan and its continued occupation of the Upper Karabakh (Nagorno-Karabakh) region.

Libya’s National Oil Corporation (NOC) called for the immediate withdrawal of foreign mercenaries from oil facilities in the country.

The Libyan army dispatched several military vehicles to the west of Sirte province.

A large number of military vehicles reached Abugrein as part of Operation Paths to Victory, that was launched to liberate the central cities of Sirte and Jufra from warlord Khalifa Haftar’s militias, according to army sources.