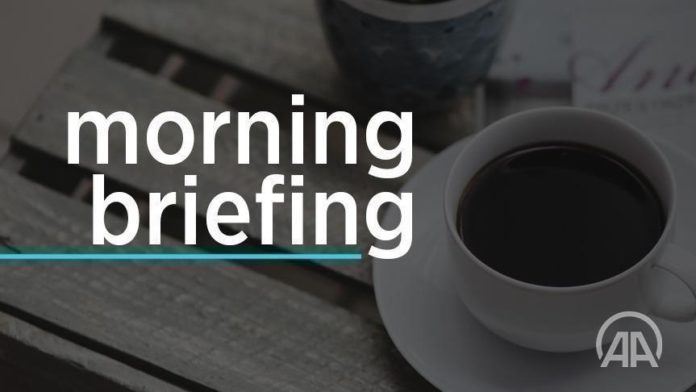 Turkey administered a total of 331,801 COVID-19 vaccine jabs in the past day, according to official figures released Sunday.

The country has administered over 57.76 million vaccine doses since it launched a mass vaccination campaign in January, according to the Health Ministry.

To date, 60.7% of the country’s adult population has received at least one vaccine dose.

The ministry also confirmed 5,261 new coronavirus infections and 37 deaths in the last 24 hours, while as many as 5,242 more patients recovered.

“Greece continues its provocative, lawless, irreconcilable and escalating stance that does not even comply with the agreements it has signed,” Akar said, answering a question from an Anadolu Agency correspondent.

Akar’s remarks came after Panagiotopoulos made statements against Turkey in a panel he attended, claiming that Turkey had acted against international law and is posing a risk of destabilizing the entire region.

More than 3.42 billion doses of coronavirus vaccines have been administered worldwide, according to figures Sunday on Our World in Data, a tracking website affiliated with Oxford University.

China leads the global count with over 1.37 billion jabs, followed by India with 376.32 million.

Turkey ranked eighth on the list with over 57.8 million doses, followed by Japan, Italy, Indonesia and Mexico.

Amid an ongoing surge in coronavirus infections and deaths, Afghanistan is looking to ramp up vaccinations for vulnerable segments of the population.

Shots of the Johnson & Johnson vaccine are now being administered in the country, just two days after 1.4 million doses of the vaccine arrived through the global vaccine-sharing COVAX initiative.

Over 400 coronavirus cases have been recorded in Tanzania this month, the health minister said Saturday, in what was the country’s first update on the COVID-19 situation since May 2020.

Speaking in the capital Dodoma, Health Minister Dorothy Gwajima said 284 out of a total of 408 patients are currently in need of oxygen.

Bosnia and Herzegovina marked the 26th anniversary of the tragic events, bidding farewell to 19 newly identified victims of the massacre at a memorial service.

Leading political figures across the world, including the Turkish president, commemorated the 1995 Srebrenica genocide on Sunday.

In a video message at the memorial ceremony to mark the massacre’s anniversary in Bosnia, Recep Tayyip Erdogan said Turkey will continue to stand with Bosnia and Herzegovina and Bosnians.

Denial of the Srebrenica genocide, in which more than 8,000 Bosnian Muslims were murdered by Bosnian Serb forces, continues in the region to this day, according to a new report released this week.

Israeli President Isaac Herzog said he intends to maintain dialogue with his Palestinian counterpart Mahmoud Abbas, who called him on Sunday to congratulate him on assuming office.

“I spoke this evening with the head of the Palestinian Authority, Mahmoud Abbas, who called to congratulate me on entering my new role. In my words of thanks, I emphasized that I intend to continue to maintain ongoing dialogue with him as previous Israeli presidents have done,” Herzog wrote on Twitter.

During their meeting, Sameh Shoukry told Yair Lapid that the current difficulties between Palestinians and Israelis should be resolved and comprehensive and fair peace talks should begin, according to a statement from the Egyptian Foreign Ministry.

Four more victims were pulled Sunday from the rubble of a building that collapsed in the US state of Florida, bringing the death toll to 90, Miami-Dade Mayor Daniella Levine Cava said.

Of those, 71 victims have been identified, and their next of kin has been notified.