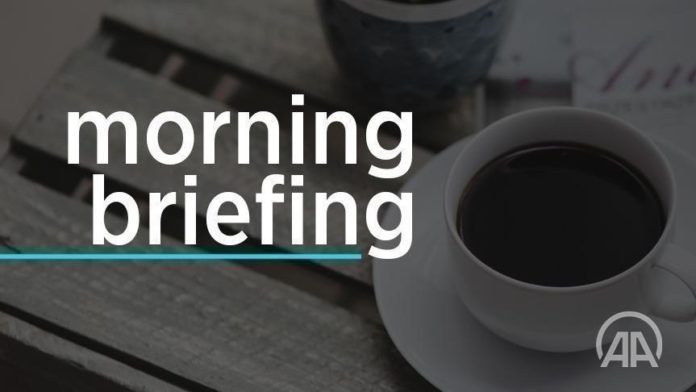 – Coronavirus and other developments in Turkiye

To stem the virus’ spread, the country has also administered more than 140.74 million doses of COVID-19 vaccines since it launched an immunization drive in January 2021.

More than 57.3 million people have gotten their first jab while over 52.2 million have received their second shot, the latest ministry data showed. Turkiye has also given third booster shots to 24.2 million people.

Voters in the Turkish Republic of Northern Cyprus (TRNC) cast their ballots Sunday in early parliamentary elections. The Supreme Election Board (YSK) announced that with 70.64% of the votes counted, the ruling National Unity Party (UBP) is in first place with 39.82% of the vote.

Protesters held a rally Sunday in Georgia’s capital calling on the government to send a clear message of solidarity with Ukraine amid heightened tensions between Kyiv and Moscow.

The UK will stand “shoulder to shoulder” with Ukraine, but it is “extremely unlikely” that they will send troops, the British deputy prime minister said Sunday.

A Spanish warship with around 200 sailors set sail for the Black Sea on Saturday to bolster NATO’s presence in the region as tensions run high around the borders of Ukraine, where there is a large Russian military buildup.

A Muslim lawmaker from the UK’s ruling Conservative Party said Sunday that Prime Minister Boris Johnson told her he “could not get involved” when she claimed she was fired as a minister over her “Muslimness.”

A high-ranking member of the French military was killed in action and nine soldiers were wounded when the Barkhane military camp in Mali was hit by rockets, a statement from the government said Sunday.

Amid ongoing political tensions in Bosnia-Herzegovina, Serbian President Aleksandar Vucic has said that no one in the region is interested in war.

At least 16 people were killed and eight others seriously injured when a fire broke out early Sunday at a nightclub in Yaounde, Cameroon’s capital, authorities said.