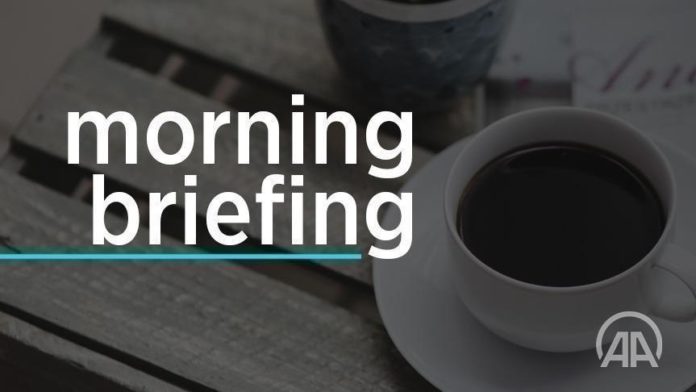 – Coronavirus and other developments in Turkiye

Turkiye registered 63,967 new cases, 177 related deaths and 52,016 recoveries in the last 24 hours. To stem the spread of infections, the country has administered more than 139 million coronavirus vaccine doses since it launched an immunization drive in January 2021.

Turkiye has neutralized 44 terrorists in anti-terror cross-border operations since an attack last week, according to the national defense minister.

In response to a question by Anadolu Agency on operations launched after three Turkish soldiers were killed in an improvised explosive device blast, Hulusi Akar said: “After the treacherous attack, we launched punitive operations against the detected targets” in the Operation Peace Spring area in northern Syria, adding that “44 terrorists were neutralized” as a result of the operations.

The condition has been removed “in line with the decision taken by competent authorities,” Bilal Eksi, general manager of the national flag carrier, said on Twitter.

The World Health Organization (WHO) said Ethiopia has prevented it from delivering health supplies to violence-hit Tigray since last July.

The UN health agency was responding to Ethiopian allegations against its chief, Tedros Adhanom Ghebreyesus, who is from the northern Ethiopian region.

In a statement to Anadolu Agency, the WHO said it has repeatedly called for urgent and unimpeded access to deliver health supplies to the people of Tigray, where government forces are fighting the rebellious Tigray People’s Liberation Front (TPLF), which once dominated Ethiopian politics for 14 months.

Meanwhile, at least 225 people were killed in unrest in Kazakhstan following protests triggered by a fuel price increase, the prosecutor general’s office said.

Their bodies were taken to morgues throughout the country, according to Russia’s TASS news agency, citing Serik Shalabayev, the head of criminal prosecution at the prosecutor’s office.

In the US, a gunman is holding four hostages at a synagogue in the state of Texas, according to reports.

The ongoing situation is at Congregation Beth Israel in Colleyville.

The gunman is said to have entered the synagogue during a Shabbat morning service, Dallas Morning News reported.

CNN, citing a law enforcement official, said a rabbi is among the hostages.

In sports, the Federal Court of Australia in Melbourne will decide Sunday whether Serbian tennis superstar Novak Djokovic can stay in the country.

The hearing, where the objection to an earlier ruling was discussed, started at 9.30 a.m. local time.

Djokovic, 34, is following the hearing via video conference.