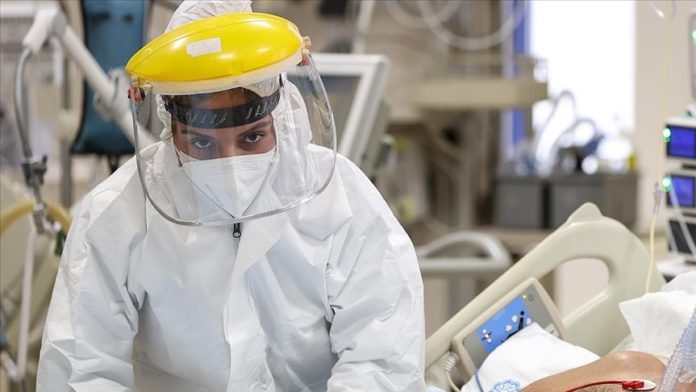 The country’s case count topped 2.5 million, while nationwide fatalities reached 26,354 after 117 deaths over the past day.

Two Turkish citizens have contracted the South African variant of the coronavirus while one has contracted the Brazilian variant, the country’s health minister said. In addition, 196 cases of the UK virus strain have been detected in the country, said Fahrettin Koca.

Following the announcement of a possible new constitution, Turkey’s president welcomed everyone who wished to contribute to its drafting.

Turkey welcomed the extension of the New Strategic Arms Reduction Treaty (New START) between the US and Russia for another five years.

Uighurs living in Turkey staged a sit-in outside the Chinese embassy in Ankara demanding to know the condition of their family members held at concentration and forced labor camps in China.

Switzerland’s health regulator said Wednesday that data submitted by the British-Swedish drug company AstraZeneca were insufficient to authorize the use of its COVID-19 vaccine.

Spain’s COVID-19 death toll surpassed 60,000 on Wednesday as the country detected community transmission of the South African variant for the first time.

More than 10 million people in the UK have received the first dose of the coronavirus vaccine.

Turkish experts have warned against three new strains of the coronavirus from England, South Africa and Brazil that now threaten the world due to their high rates of transmission.

The Turkish Republic of Northern Cyprus (TRNC) extended a nationwide lockdown until Feb. 11 to curtail the spread of the coronavirus, the Health Ministry announced Wednesday.

The World Health Organization announced that Somalia will receive 1.2 million doses of the Oxford-AstraZeneca vaccine this month.

Georgia added Turkey to its list of countries whose unvaccinated nationals would be allowed into the country with just a negative novel coronavirus test result.

UN Secretary-General Antonio Guterres said Wednesday he would rally the international community and key players to do everything possible to thwart the recent coup in Myanmar.

The US said it is prioritizing sanctions on members of the Myanmar military after it staged a coup d’état and seized power from the civilian government for at least one year.

The Biden administration should work to extend a May 1 deadline for the withdrawal of US forces from Afghanistan, a report to lawmakers said.

The UN’s high court said it has the jurisdiction to rule on a bid by Iran to overturn US sanctions that were reinstated during former President Donald Trump’s administration.

One civilian was killed and three others were injured in a rocket attack by regime forces on a residential area within Syria’s Idlib de-escalation zone, according to local sources.

US Ambassador to Turkey David Satterfield said the US continues its commitment to the long-standing and successful business relationship with Turkey and is keen to strengthen existing commercial ties.

The resumption of direct Palestinian-Israeli talks will depend on the results of Israel’s parliamentary elections in March and the position of the new US administration, Russian Foreign Minister Sergey Lavrov said.

Russian President Vladimir Putin discussed deliveries of the Sputnik V vaccine and finding a solution to the issue of Kosovo in a phone call with his Serbian counterpart.

Twenty years after his assassination, France will honor the memory of Afghan hero and military commander Ahmad Shah Massoud with a plaque in the city of Paris.

The UK hailed the extension of the New Strategic Arms Reduction Treaty (New START) between the US and Russia for another five years.

At least 16 people have died since Jan. 31 in northern Bangladesh’s commercial hub of Bogra after consuming toxic liquor, according to officials and media reports.

A senior Turkish lawmaker called on the Baghdad government to cooperate with Turkey to resolve Iraq’s water problems.

Ukraine is interested in strengthening its defense capabilities with the help of Turkey, which has become an undisputed global leader in the pace of national defense industry development, a senior Ukrainian official said.

EU foreign affairs ministers will discuss the bloc’s response to the sentencing of Russian opposition leader Alexey Navalny at their next meeting, the top EU diplomat announced Wednesday.

Canada added 13 groups to its list of terrorist organizations, including white supremacist, neo-Nazi and anti-Muslim organizations.