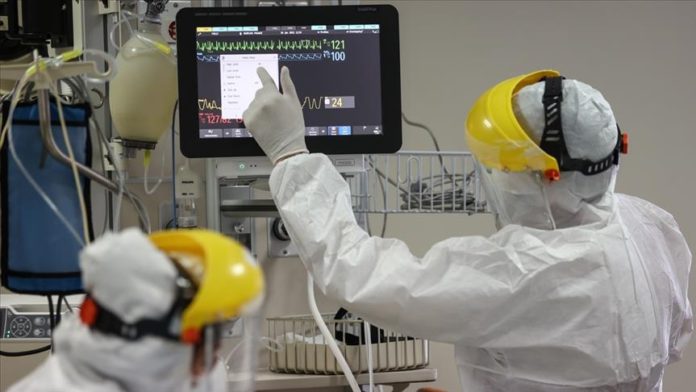 Turkey registered 7,795 new coronavirus cases Tuesday, including 630 symptomatic patients, according to data released by the Health Ministry. The country’s case count topped 2.49 million, while nationwide fatalities reached 26,237 with 120 deaths over the past day.

A group of Turkish scientists in the Black Sea province of Samsun finalized their research on causes for the severity of COVID-19 in the elderly and patients with chronic illnesses.

Turkish Foreign Minister Mevlut Cavusoglu stressed the importance of negotiations based on sovereign equality to resolve the Cyprus issue.

Dozens who were recently arrested in Turkey amid ongoing university protests are members of far-left terror groups, the country’s interior minister said.

The harsh winters in eastern Turkey can prove to be a bane for the toughest of creatures. The season is particularly arduous for birds, who are left without shelter as the freezing cold devours all foliage.

The head of the Turkish Red Crescent said his organization provides food to about 3,000 Somalis on a daily basis, thanks to the benefactors who believe in the just cause.

A major party in Turkey voiced agreement with top government officials on drafting a new constitution. Devlet Bahceli, the leader of the Nationalist Movement Party, said in a statement that Turkey is “obligated” to replace its current constitution.

European Commission President Ursula von der Leyen has defended Europe’s vaccine strategy amid growing criticism over delays and a shortage of doses as well as a lack of transparency over exports and steadily rising cases due to the circulation of multiple coronavirus variants.

French President Emmanuel Macron called late Tuesday for ensuring global access to vaccines against COVID-19 in Europe and among poor and developing countries if the virus is to be defeated.

The UK has administered more than 10 million vaccines against the coronavirus as of Tuesday, according to official figures.

Portugal is listed as one of the risky countries for the novel coronavirus as the country was hit hardest by the second wave since September 2020 compared to the first one in March-April last year.

Spain announced Tuesday that it is restricting travel with Brazil and South Africa as the country reported its highest daily COVID-19 death toll since early April. Another 724 lives were lost to the disease, according to the Health Ministry.

Europe last week witnessed widespread protests against restrictions imposed to stem the spread of the coronavirus.

US pharmaceutical giant Pfizer expects $15 billion from COVID-19 vaccine sales this year, according to its financial results statement released Tuesday.

The Sputnik V coronavirus vaccine developed in Russia has shown “a consistent strong protective effect across all participant age groups,” according to a study published in the medical journal The Lancet.

Saudi Arabia indefinitely suspended arrivals from 20 countries as a precautionary measure to stem the spread of the coronavirus.

Over the past week, 75 Nigerian health workers have tested positive for the new coronavirus strain detected in the country, an official said late Monday.

You may enjoy the analysis on the consequences of global COVID-19 vaccine inequality here.

Palestine began its coronavirus vaccination campaign starting with medical workers, according to the Palestinian Ministry of Health.

Greece on Tuesday saw a jump in coronavirus cases with 1,261 new daily infections. This is the highest the country has yet seen this year after weeks of relatively low numbers.

While strong economies in the world have bought millions of coronavirus vaccines, purchasing a cure is not a possible option for many nations in Latin and Central America.

Indonesia received the fourth shipment of raw materials for 10 million doses of a COVID-19 vaccine from Chinese company Sinovac, according to the country’s health authority.

Japan extended a state of emergency in the capital Tokyo and 10 other provinces for a month to stem the spread of the coronavirus.

India’s daily death toll from the coronavirus fell below 100 for the first time in almost nine months, official figures showed.

The court turned his suspended sentence in a 2014 criminal case into a full custodial sentence, handing Navalny a three-and-a-half-year jail term minus nearly a year he spent under house arrest from Feb. 28 to Dec. 30 in 2014.

Top EU officials called for the immediate release of the Russian opposition figure.

Britain called for the “immediate and unconditional release” of Navalny after he was sentenced to nearly three years in jail.

The US sharply criticized the sentencing of a Russian opposition leader to more than two-and-a-half years behind bars, saying the prison term is a blatant effort to stifle political dissent.

The YPG/PKK terrorist organization has detained at least 100 civilians in the last 10 days to forcibly recruit them in areas under its control in eastern Syria, according to local sources.

Hours before a UN Security Council meeting to discuss the military takeover in Myanmar, China said Tuesday it was “negotiating with all parties involved.”

Turkey is an important NATO ally, the German defense minister said, following a meeting with her Turkish counterpart Hulusi Akar in the capital Berlin.

Amazon CEO Jeff Bezos announced Tuesday that he will step down from his position at the mega retailer and cloud-computing company during the third quarter of 2021.

With France’s economy hit hard by the novel coronavirus pandemic, university students face difficult circumstances due to the increased cost of living, high rent and joblessness.

Italy’s president has summoned former European Central Bank chief Mario Draghi for a meeting Wednesday after stressing the urgent need for political parties to back the creation of a “high-profile” government able to lead the country through its health and economic emergency.

Egypt denied that Israeli pipelines stretching between the Red Sea and the Mediterranean will have significant negative impacts on the Suez Canal.

Breast cancer has overtaken lung cancer as the most common form of the disease globally, a World Health Organization (WHO) expert said.

The European Union expressed regret over Kosovo’s decision to open its embassy in Jerusalem.

At least 123 doctors die of coronavirus in Indonesia