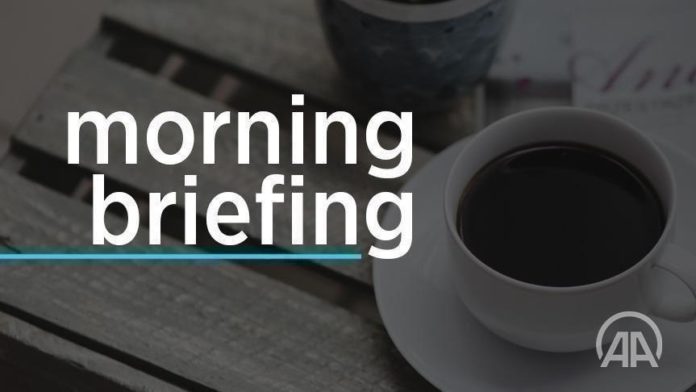 Turkey ended a nationwide weekend curfew early Monday aimed at helping to stem the spread of the coronavirus.

Turkey reported 26,919 more COVID-19 infections over the past 24 hours, including 5,103 symptomatic patients, according to Health Ministry data released Sunday. The total number of cases reached 1,836,728 with the latest additions, the data showed.

A medical equipment company in western Turkey launched sales of a coronavirus antigen test produced using indigenous antibodies. Turklab, founded 25 years ago in the Aegean province of Izmir, has developed an antigen test alternative to polymerase chain reaction (PCR) tests in its studies on the virus.

The Turkish Culture and Tourism Ministry brought back a historical statue of Cybele, an ancient goddess of fertility, which was smuggled to Israel in the 1960s and sold there.

Turkish security forces have neutralized a total of 68 terrorists in domestic and cross-border anti-terror operations over the past month, the National Defense Ministry announced.

Gene therapy for spinal muscular atrophy (SMA) patients is effective for infants whose symptoms have never started or have just started, according to a pediatric and neonatal intensive care physician.

Turkey earned over $15.4 million when it exported over 4,000 tons of tea to 100 countries in the first 11 months of 2020, according to data from the Eastern Black Sea Exporters’ Association.

Italy on Sunday reported a fall in the number of daily fatalities from the novel coronavirus, although the death toll remained worryingly high compared to the other European countries.

According to the latest Health Ministry data, daily fatalities stood at 484, down from 649 a day before, raising the nationwide death toll to 64,520 as Italy overtook the UK as the country with the highest number of virus-related deaths in Europe.

Germany on Sunday announced stricter lockdown measures amid soaring COVID-19 cases and fatalities. Chancellor Angela Merkel told a news conference in Berlin that all non-essential shops will shut down as of Wednesday and schools and daycares will also be closed until at least Jan. 10 in most of the federal states.

Eswatini Prime Minister Ambrose Dlamini has died, the government announced early Monday. The prime minister was airlifted to neighboring South Africa about two weeks ago after testing positive for COVID-19.

New cases of COVID-19 are surging again across various age groups in different parts of Rwanda, the health minister said Sunday, a day after the ministry reported 100 more daily infections, the highest for the first time in the last three months.

On a cold, gray Sunday in Western Michigan, big delivery trucks started rumbling out of a massive Pfizer distribution plant at 7000 Portage Road in Portage, Michigan.

Palestine confirmed an additional 17 fatalities from the coronavirus pandemic Sunday.

The government is planning to buy more COVID-19 vaccines to immunize as many as 70% of Malaysians, the country’s prime minister said Sunday.

Malaysians are urging the government to approve coronavirus vaccines and start a vaccination drive at the earliest as a minister said it will not rush the approval of COVID-19 vaccines for emergency use.

In Latin America, more cases and fatalities from the novel coronavirus were reported Sunday.

The coronavirus claimed four more lives in Sudan and sickened 134 others in Qatar, health authorities said.

Bangladesh on Sunday signed a procurement contract with the Serum Institute of India, which is producing doses of Oxford-AstraZeneca’s COVID-19 vaccine, an official said.

Armenian forces in Nagorno-Karabakh violated a cease-fire and martyred four Azerbaijani soldiers last week, Azerbaijani officials said Sunday. Some Armenian soldiers remained in the forest area of Hocavend province despite agreeing to withdraw, the Defense Ministry and the State Security Service said in a joint statement.

The head of the Hamas group, Ismail Haniyeh, said Sunday that the Palestinian Authority’s decision to restore relations with Israel “formed an intense barrier” in front of achieving reconciliation with the Fatah group.

Iraq has released at least 75 children due to a lack of evidence for alleged links with the Daesh/ISIS terrorist group, said Human Rights Watch.

The UN has adopted an international prize named after Bangladesh’s founding father in the field of creative economy, the Foreign Ministry said Sunday.

Tens of thousands of opposition supporters rallied in Pakistan’s northeastern city of Lahore on Sunday, despite a government ban on public gatherings due to the coronavirus.