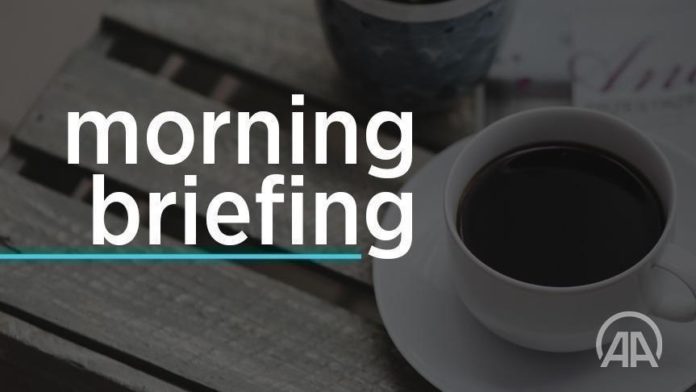 Six people were killed and several are missing after a sailing boat carrying migrants sank off the island of Paros in the Cyclades, according to the Hellenic Coast Guard.

The US is set to lift travel restrictions on eight southern African countries at the end of the year that were imposed because of the omicron variant of the coronavirus, said administration sources.

The World Health Organization warned that the omicron variant is spreading significantly faster than the delta variant.

Russia expects to receive a concrete US response to its proposals on security guarantees in January, according to Kremlin spokesman Dmitry Peskov

The Russian Foreign Ministry announced it summoned the Ukrainian charge d’affaires after a Molotov cocktail was thrown at the entrance of the Russian consulate in the Ukrainian city of Lviv.

European countries and the US urged Libyan authorities to decide Friday on a final date for elections without delay.

Sefik Dzaferovic, the Bosniak member of the tripartite presidency of Bosnia and Herzegovina (BIH), said that a recent law in the Balkan nation banning the denial of genocide and glorification of war criminals is “identical in its content to EU directives on the fight against hate speech.”

– Developments in Turkey Recent steps by the Turkish Central Bank and Turkey’s new economic model will lead to lower inflation, according to the nation’s president.

Turkey will provide its domestically developed coronavirus vaccine, Turkovac, to all of humanity, Erdogan said.

“Turkey has become one of the nine countries that can produce a COVID-19 vaccine. We tested both the efficacy and safety of our vaccine and after making sure, we made it available to humanity,” he told news channel A Haber.

Turkey has administered nearly 128 million coronavirus vaccine doses since it launched an immunization drive in January, according to official figures.

More than 56.77 million people have received a first jab, while over 51.36 million are fully vaccinated, said the Health Ministry.

Turkey and Qatar are reportedly working out details of a long-rumored deal to operate the airport in the Afghan capital of Kabul, diplomatic sources told Anadolu Agency.

Christmas masses were held — Christmas Eve on some Christian calendars — by Orthodox churches in ancient cities in Turkey’s southernmost province of Hatay.

Turkish cellist Dilay Ra Oygur, 14, has been invited to give a concert at New York’s famed Carnegie Hall when she receives first prize in the Golden Classical Music Awards.