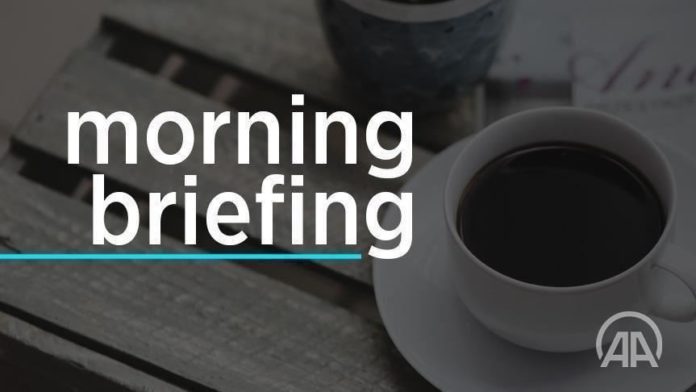 Welcoming a controversial deal between Israel and the UAE to normalize relations, the EU on Friday called for Tel Aviv to abandon plans to annex areas of the West Bank.

Luxembourg’s foreign minister lambasted the UAE for the deal and accused it of selling out the Palestinian cause.

Political groups in Kuwait, Yemen and Morocco denounced the agreement.

Iran’s foreign minister and the political head of Hamas discussed the deal.

Turkey may downgrade relations with the UAE, Turkey’s president said.

Meanwhile, Israel carried out a series of airstrikes in central and northern Gaza Strip late Friday. The Palestinian Health Ministry said initial reports show a 3-year-old was injured in the attacks.

A call by Greece and the Greek Cypriot administration to condemn Turkey over recent actions in the Eastern Mediterranean was left hanging by EU member states.

Dialogue and negotiation are key in addressing issues of delimitation of maritime boundaries and exploitation of resources, according to EU foreign ministers.

Turkey’s foreign minister will pay official visits to the Caribbean region next week, the ministry said. Mevlut Cavusoglu will also meet his US counterpart, Mike Pompeo, who will also be in the Dominican Republic and the two will discuss the latest developments in the Eastern Mediterranean.

Secretary of State Mike Pompeo discussed with his Greek counterpart the “urgent need” to soothe tensions in the Eastern Mediterranean, according to the State Department.

Turkey responded to all interventions on its energy exploration ship in the Eastern Mediterranean and will continue to do so in the future, according to the Turkish defense minister.

Turkey will respond to any Greek harassment of its energy exploration ship Oruc Reis in the Eastern Mediterranean, the country’s foreign minister warned. “Greece should avoid maximalist policies in the region,” Mevlut Cavusoglu told a joint press conference with his Swiss counterpart Ignazio Cassis in Bern.

The UN Security Council late Friday turned down a resolution introduced by the US to indefinitely extend an arms embargo on Iran.

Although the shock of a deadly explosion last week remains raw, the spirit of resistance of the people of Beirut is admirable, as they help heal each other’s wounds a little more each day. However, the streets of Beirut are like war zones, with collapsed buildings, shattered roads and garbage scattered everywhere.

Hezbollah Secretary-General said Israel will pay a heavy price if it is responsible for the blast.

Turkey registered 1,226 new cases of the novel coronavirus, bringing its tally to 246,861.

A total of 923 patients have recovered from COVID-19, the disease caused by the virus, in the last 24 hours, Health Minister Fahrettin Koca said on Twitter. Citing the Health Ministry data, Koca said the number of recoveries reached 228,980.

Spain reported 5,479 new cases of the virus, according to health officials. The daily figure is down around 2,000 from Thursday, which included two days of data from Madrid but the weekly number of infections continues to climb.

Health authorities in Eurasian countries, such as Ukraine, Kazakhstan, Uzbekistan, Kyrgyzstan, Armenia and Georgia, reported more cases and fatalities from the novel coronavirus.

At least 169 more coronavirus-related fatalities have raised the death toll in Iran to 19,331, the Health Ministry said. A total of 2,501 more people tested positive for COVID-19 in the past 24 hours, pushing the overall count to 338,825, according to ministry spokeswoman Sima Sadat Lari.

In Belgium, the pace of new infections seems to be slowing in the past week, but there has been a significant rise in deaths, Belgium’s Public Health Institute Sciensano reported. There is a 95% growth compared to the previous seven days, taking the tally to 9,916.

Cases are rising in New Zealand and Australia despite anti-COVID-19 measures adopted by their respective governments.

At least 10 more fatalities and more than 370 new infections have raised Nigeria’s death toll to 966 and case count above 48,000, authorities said.

The UK reached a number of agreements to access 90 million more early doses of two potential vaccines for the coronavirus, according to a government statement.

The US allegedly declined Russia’s offer to help with the coronavirus vaccine, Russian officials told CNN. Officials who spoke anonymously, said Thursday they proposed “unprecedented cooperation” with the US’ Operation Warp Speed, a government program that aims to begin delivering millions of doses of an effective virus vaccine by the end of 2020. However, they claimed the US “is not currently open” to cooperation.