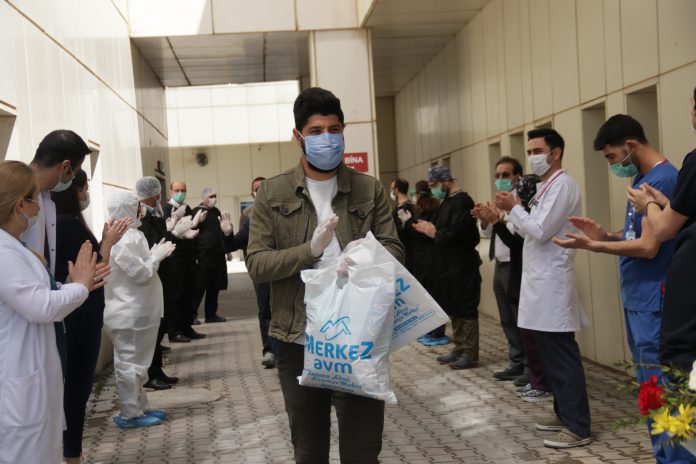 The country’s health minister confirmed 95 more deaths from COVID-19 in the past 24 hours, bringing the death toll to 2,900.

In addition, the total number of registered coronavirus cases climbed to 112,261 as 2,131 more people tested positive for the virus.

Turkey has so far delivered aid to at least 57 countries around the globe to help them combat the coronavirus outbreak.

Meanwhile, at a press conference after a Cabinet meeting, Turkish President Recep Tayyip Erdogan announced a 3-day curfew in 31 cities starting May 1. “By overcoming COVID-19, Turkey hopes to have a double feast at the end of Ramadan,” he said.

The global death toll from the novel coronavirus crossed the 211,000 mark with the number of cases exceeding 3 million, according to a running tally by US-based Johns Hopkins University. Additionally, more than 893,000 people worldwide have recovered from COVID-19.

The US is still the most affected country in the world, where deaths have surpassed 55,000 and confirmed cases exceed 980,000.

Italy, one of the worst-hit countries in Europe by the coronavirus, reported 333 new deaths, bringing its tally to 26,977, and a new drop in active infections.

Data released by the Italian Civil Protection Department confirmed that the flattening of the curve continues as the government finally unveiled its plan to allow a partial restart of business activities from May 4.

Spain’s Health Ministry announced 331 more deaths from the virus, pushing the total number of fatalities to 23,521. For the fourth day in a row, the country reported more recoveries — 2,144 — than new active infections at 1,831.

Spanish healthcare workers across the country launched a virtual protest over their working conditions. More than 100,000 tweets were counted on Twitter. Hashtags like #NeitherHeroesNorMartyrs rapidly became trending topics.

Meanwhile, France saw a rise in fresh cases and deaths from the coronavirus. There were 437 new fatalities during the past 24 hours. Since the start of the outbreak, the total number of deaths have risen to 23,293.

Russia registered more coronavirus cases than China, the initial epicenter of the novel coronavirus, an authority said Monday. An additional 6,198 people tested positive for COVID-19 over the last 24 hours to bring the total number of cases in Russia to 87,147, compared to some 84,000 in China, the emergency team said in a statement.

British health authorities announced Monday that the UK-wide death toll from the coronavirus had risen by 360 in the last 24 hours, continuing a pattern of decline. At a daily press briefing, Health Secretary Matt Hancock said the total death toll in hospitals was now 21,092.

State media reported an additional 96 fatalities in Iran and the death toll rose to 5,806.

In China, 50,000 students returned to schools in the capital Beijing.

The officials said that outside Hubei, three new cases were confirmed, of which two were imported, taking the tally of imported cases to 1,636.

China has asked the WHO to initiate a probe into US handling of the COVID-19 pandemic.

In Afghanistan, as part of measures to prevent the spread of the coronavirus, President Ashraf Ghani issued a decree to release over 12,000 inmates and to reform various prisons.

The World Bank has approved a $100 million loan to Turkey to support its efforts to fight the coronavirus pandemic.

Turkey’s communications director Fahrettin Altun said that 500,000 surgical masks and other personal protective equipment were sent to the US, adding that “we stand in solidarity with the United States, our NATO ally, against COVID-19.”

Turkey continues to evacuate its citizens around the world as part of ongoing repatriation efforts for Ramadan amid the coronavirus pandemic. The country brought back 755 citizens on Monday from Qatar, Ukraine and Saudi Arabia.

Despite the Muslim holy month of Ramadan, conflicts and clashes continue in Libya. Militias loyal to warlord Khalifa Haftar killed a mother and child east of Libya’s capital, the Libyan government media office said in a statement.

Meanwhile, Warlord Khalifa Haftar on Monday unilaterally declared himself the ruler of Libya. In a video message, Haftar pointed to street demonstrations in areas under his control and claimed he “accepted the mandate of the Libyan people” to govern the country.

Three civilians were killed in an Israeli missile attack near Syria’s capital Damascus on Monday. The attack left four civilians injured, including a child.

The Syrian Network for Human Rights reported that the Syrian regime killed 44 civilians, including six children, in March and April and its forces arrested 156 people and committed at least four attacks on vital civilian facilities, including two schools.

According to the EU’s statistical office, EU member states granted protection to 295,800 asylum seekers in 2019.

US President Donald Trump said he had a “very good idea” about North Korean leader Kim Jong-un’s health amid speculation that he is either seriously ill or dead. “I can’t tell you exactly. I do have a very good idea, but I can’t talk about it now,” Trump told reporters at the White House.

From the football world, Italian Prime Minister Giuseppe Conte said though the restart dates are still uncertain, sports teams can resume training on May 18.

UEFA distributed €236.5 million ($256 million) to 55 member associations due to financial struggles from the coronavirus outbreak.