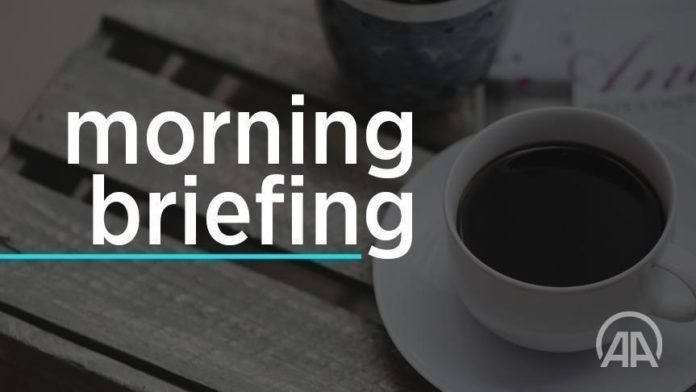 Turkey reported 40,596 new coronavirus cases, including 2,905 symptomatic patients, according to the Health Ministry.

The number of cases surpassed 4.5 million while the nationwide death toll stands at 38,011 with 339 fatalities in the last 24 hours.

The Foreign Ministry said remarks by US President Joe Biden on Armenian claims about the events of 1915 lacks any scholarly or legal basis and is not supported by evidence.

Turkey entirely rejects Biden’s remarks which are based solely on populism, said the nation’s foreign minister.

Turkey’s ​​communications director said US officials ignored history to bow to the demands of lobbyists.

President Recep Tayyip Erdogan sent a letter to the head of the Armenian Patriarchate in Istanbul urging good neighborly relations with Armenia.

Erdogan and his Azerbaijani counterpart, Ilham Aliyev, exchanged views “in light of recent developments,” according to an official statement.

Turkey commemorated martyred diplomats who were assassinated by Armenian terror organizations since the 1970s.

Nearly 400 targets have been hit by Turkish land forces and over 60 more by air during anti-terrorism operations in northern Iraq, according to Turkey’s defense minister.

Scientists recommended “smell training” for COVID-19 survivors who have lost their sense of smell, according to media reports.

Pakistan announced its highest daily death toll from coronavirus this year as authorities recorded 157 fatalities in the past 24 hours.

Iran announced it will suspend flights with India and Pakistan because of the worsening COVID-19 situation in those countries.

Kuwait ordered a suspension of all commercial flights with India amid a surge in infections in New Delhi.

Former generals and military personnel warned President Emmanuel Macron in a letter to act against the looming dangers of hatred due to social tensions, religious extremism or face a civil war-like situation in the future.

The Iraqi army said it is not in need of foreign or US troops to fight alongside its forces.

Israeli forces hit Hamas positions after it said three rockets were fired from the Gaza Strip.

Egypt condemned attacks and provocative actions by Israeli settlers on Palestinians in occupied East Jerusalem since the beginning of the Muslim holy month of Ramadan.

Stressing an end to the violence, leaders of the Association of Southeast Asian (ASEAN) countries reached a five-point consensus on the Myanmar coup crisis, according to a joint statement.

Four intelligence officials, s university lecturer and a civil servant were gunned down in targeted attacks in the Afghan capital.