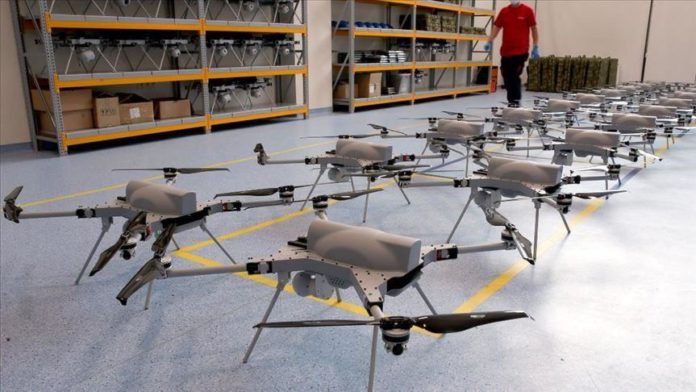 STM Defense Technologies Engineering, which offers Kamikaze drones for use by security forces, continues its efforts for more advanced products and exports at the Ostim Technopark facilities in Turkey’s capital Ankara.

A team of engineers at the compound works mainly on tactical and autonomous systems, mainly for the Togan, Alpagu and Kargu models.

The Ostim facility houses the main center for these models — the company’s “autonomous” product line — as well as the infrastructure for their mass manufacturing.

Additional health measures have been taken at the compound to shield employees against the novel coronavirus, with intense work now on orders received for the Autonomous Rotary Wing Attack Drone Kargu, which recently entered the Turkish Armed Forces’ inventory.

STM is now preparing to deliver installments of over 500 Kargu orders in the coming term to be used by the country’s security forces.

The development of the Kargu platform — now in use by the Turkish Armed Forces for roughly a year — has benefited greatly from field use.

Though it has performed well in meeting the needs of the Turkish military, it is continually undergoing improvements towards being perfected in the future.

With its advanced machine vision capabilities, Kargu can function both as a single platform and as part of a swarm of up to 20 platforms since exercises began to be conducted last year.

Efforts continue in this field to streamline and improve swarm algorithms to perform different tasks.

The KERKES Project is ongoing to enable the drone swarm to function smoothly in any environment.

After the completion of this project, STM will be able to offer Kargus with full swarming abilities to the Turkish Armed Forces in approximately 12-18 months.

Efforts also continue on Kargu’s integration with other platforms.

The model, which has been used by the Turkish Armed Forces and gendarmerie so far, will be able to work in tandem with various other — especially marine — platforms, in the future.

Research into integrating the Kargu with armored land vehicles and autonomous land systems are also being conducted.

There has been great international interest in the Kargu after its use by the Turkish Armed Forces.

Having previously participated in tests and trials in different countries, the Kargu has been admired for its performance.

It has proven its success in tropical, desert and tundra climate conditions, with talks now underway with three countries for the export of the kamikaze drone.

High-level talks conducted with Turkey’s friendly and allied countries have made significant progress.

The STM is preparing to achieve its first export success story in autonomous systems by soon completing export negotiations.

With the Kargu’s field successes, foreign interest in the drones is expected to increase even more.

STM has been part of Turkey’s defense industry in the fields of engineering, technology and consultancy for more than a quarter-century.

The firm works on naval and air platforms, cyber-security, big data, autonomous systems and artificial intelligence to satisfy the needs of Turkey and friendly nations.