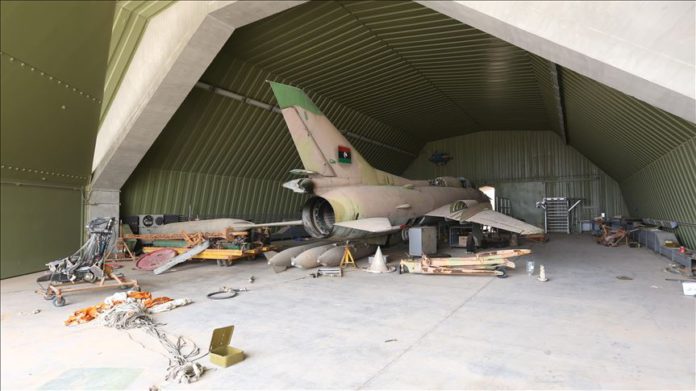 A team from Anadolu Agency toured the strategic Al-Watiya airbase, which had been occupied by warlord Khalifa Haftar’s militias and was retaken by the Libyan Army early Monday.

The base was liberated in a very short time after an operation was launched in the morning, said Colonel Mohammad Dava from the army’s Western Operations Department.

He noted that a Russian-made Pantsir air defense system was seized from the militias and will be moved to a Libyan government base.

Soldiers of the Libyan Army took a photo in front of the Pantsir air defense system, which had been supplied by the United Arab Emirates (UAE) to the militias.

Members of the press were taken to the base after a security check.

Many unusable military vehicles, vans and aircraft in hangars that were destroyed during the army’s air strikes with unmanned aerial vehicles were displayed.

Al-Watiya is seen as a key airbase, second only to Mitiga Airport. It was captured in 2014 by Haftar, the leader of illegally armed forces in eastern Libya, who used it as his headquarters for attacks on the legitimate government.