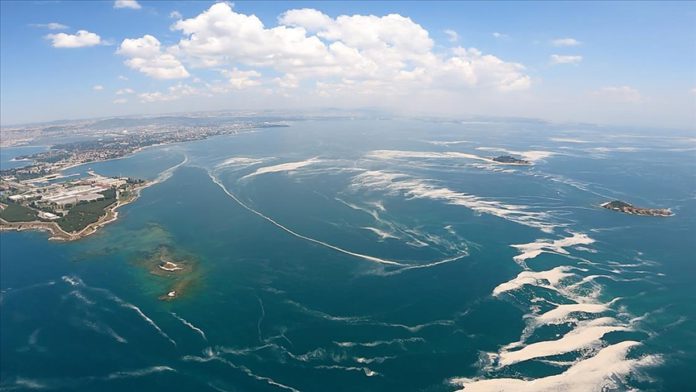 As Turkey continues cleaning up mucilage, also known as “sea snot,” from the Sea of Marmara, Anadolu Agency took aerial images of the waters covered by the thick, mucus-like slimy layer containing a variety of microorganisms.

The latest situation in the Sea of Marmara was reflected in the images taken by an Anadolu Agency correspondent from a plane that took off from Yunuseli Airport in northwestern Bursa province.

The mucilage – mostly accumulated in Mudanya, Gemlik Bay, Gebze and its surroundings, the coastal areas of Istanbul’s Anatolian side and around the Princes’ Islands – also partially covered the shores of the Sea of Marmara.

The sea snot covering the central coast of northwestern Yalova province dispersed in the coastal areas of Cinarcik and Armutlu districts as well as Esenkoy town, which are important touristic centers of the city, due to the wind.

The mucilage, which may be found in certain locations in the Gulf of Izmit, is also found off the coast of Balikesir-Bandirma.

Speaking to Anadolu Agency following a three-hour flight on the Sea of Marmara, pilot Burak Yurekli said there is mucilage concentration in certain areas.

“In general, the open and central parts of the Sea of Marmara were cleaner,” he said.

“There were accumulations in areas such as Gulf (of Izmit) gulfs where there was mostly no water flow.”

Pointing out that the Sea of Marmara was clean until recently, Yurekli said: “The sea is facing the danger of mucilage right now. Of course, it does not give pleasant images from above. I hope a solution will be found as soon as possible.”