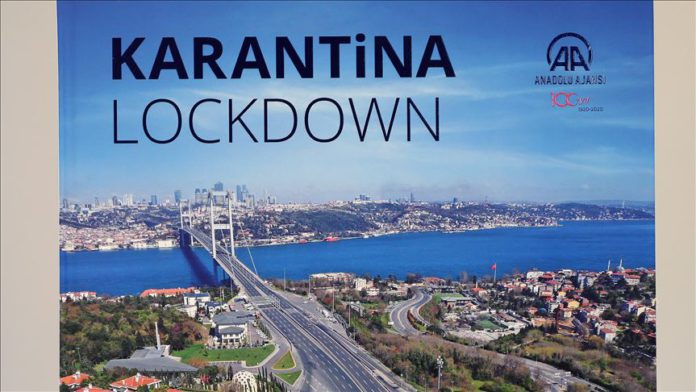 Experienced Anadolu Agency photojournalists pressed the shutter button to portray the scenes of silence across the world as people stayed home due to the novel coronavirus outbreak.

Collecting 320 photographs from all over the world in an album, the agency prepared Lockdown, is actually a historical document for the future.

Due to the pandemic, streets, squares, public transportation, beaches and historical places lapsed into silence, as never experienced before.

The photos taken in March, April and May, include many scenes from Turkey to Europe, America to Asia and Pacific, and from the Middle East to Africa.

A digital version of the special edition 320-page book will also be prepared and made available for online orders.

The album also reflects the global reach of Anadolu Agency in its 100th year.

Short texts also accompany the photos to tell how countries and cities experienced the pandemic.

Glimpses of unique views from Turkey in the first chapter show that with the outbreak, mobility on the streets dropped to a great extent.

In the short text along with the photo, measures taken to curb the spread of the virus by the Turkish President Recep Tayyip Erdogan, Health Minister Fahrettin Koca, and members of the Coronavirus Scientific Advisory Board are explained.

The second chapter — titled Europe — includes the London Eye, Regent Street, and Piccadilly Circus Underground Station in the UK as well as photos of other places in the region.

While the chapter reminds that developed European countries such Italy, Spain, Germany, and France were among the worst-hit ones by the virus, which spread from China’s Wuhan city, it also says the virus adversely affected the lives of people.

It also notes that the pandemic has turned prominent squares and streets of Europe into ghost cities.

The third chapter with title of America, shows the impacts of the outbreak reflected in photos taken in the US, Canada, Brazil, Peru, Chili, Ecuador, Mexico, Panama, Argentina, Honduras, Haiti, Guatemala, Colombia, Cuba and Bolivia.

The US topped the list of the most-affected countries from COVID-19 — the disease caused by the new coronavirus — the chapter noted, adding that a great silence prevailed in the tourist destinations such as Times Square, Central Park, Brooklyn Bridge, The Metropolitan Museum of Art in New York, which attract millions of domestic and foreign tourists each year and reported highest number of infections in the country.

A field hospital was set up in the Central Park, while the site was emptied by people as they all stayed at home due to the spread of the virus, it added.

It also highlighted the crisis and structural problems in the health system of the US, the greatest power in the world.

Asia and Pacific, the fourth chapter, featured many photographs from the region, including the epicenter of virus Wuhan city in China to Russia’s landmark places.

The text mentioned the effects of the virus in China — the world’s most populous country – as well as in South Korea, Singapore, Japan, Thailand, India, Pakistan, Indonesia, Azerbaijan, Malaysia, and Russia.

Streets and squares in the world’s most crowded cities of Beijing, Shanghai, Hong Kong, Tokyo, Delhi, Dhaka and Jakarta saw less number of people, while historical places in above-mentioned countries did not receive visitors.

In the last chapter of the photo album, the Middle East and Africa regions, suffering from war, clashes and facing great humanitarian tragedies, were reflected in photos.

The most-affected countries in the region included Iran, Israel, Saudi Arabia and Gulf countries, while Palestine tried to take measures against the outbreak under Israel’s occupation, according to the text along with the photos.

The war-torn countries of Yemen and Syria are seen as hopeful pictures as the virus did not spread at a scale to affect civilians.

Stressing the spread of virus in African countries, it said Egypt implemented curfew in some cities, while the impacts of the outbreak were also observed on the streets of North African countries of Tunisia, Libya, and Algeria.

It also noted that lives of the Libyan people were under threat due to the ongoing internal conflict in the country.

Over 100,000 liters of smuggled fuel seized in Turkey