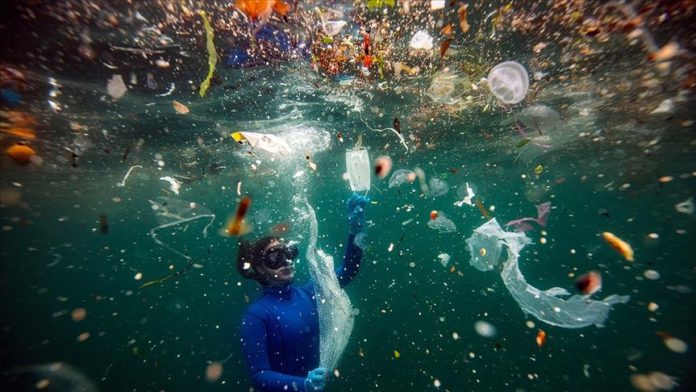 A photojournalist from Turkey’s leading news source Anadolu Agency on Friday was awarded second place by the Pictures of the Year (POY) International Award.

Sebnem Coskun received the second-place award in the Science and Natural History Singles category for her image of a diver surrounded by COVID-19 waste in the Mediterranean Sea, POY announced on Twitter.

The photo of Turkey’s multiple world-record holder Sahika Ercumen was taken last year during her dive into the Bosphorus Strait to raise awareness about plastic pollution in the seas.

Participating in the contest to raise awareness, Coskun said: “I am pleased to receive an important award in an issue we care about very much for the sake of protecting living creatures.”

“I hope we can draw more attention to this issue, which is the responsibility and problem of every individual globally,” she stressed.

According to a World Wildlife Fund (WWF) report, tens of thousands of plastic waste enter Mediterranean waters every minute. Italy and Turkey accumulate the most coastline plastic debris each year, she noted.

“While the plastics and garbage in the world pose a great danger to our seas, the medical waste newly added to this garbage as the pandemic points out to great problems and irreversible environmental pollution,” she added.

The annual photo competition is a program of the Donald W. Reynolds Journalism Institute at the Missouri School of Journalism in the US and has been awarding the best photojournalism since 1944. The awards are given in various categories after reviewed by an expert jury in press photography every year.

Anadolu Agency photojournalists had won the POY awards four times in previous years. The winners included Mosaab Elshamy from Egypt in 2014, Sebastian Castenada from Peru in 2015, Mustafa Hassona from Gaza, Palestine in 2016, Elif Ozturk from Istanbul last year, and Anadolu Agency as a team this year.