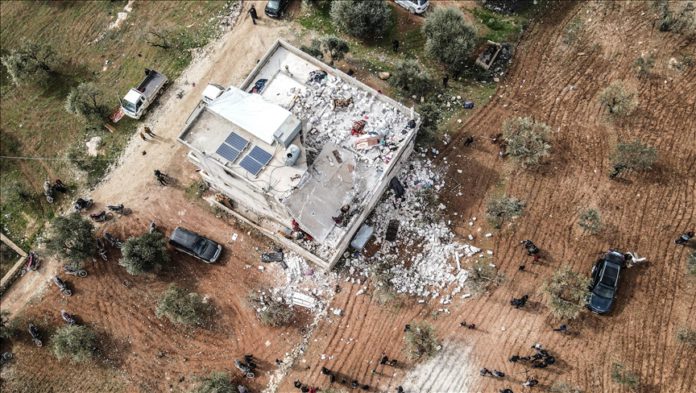 Anadolu Agency has shot a video of a US military helicopter, which an American official said was destroyed after it suffered a “technical malfunction” during the operation carried out against the Daesh/ISIS ringleader in Syria’s Idlib province on Thursday.

After the official told the press that one of the helicopters participating in the operation was destroyed after it suffered a technical malfunction, a team of Anadolu Agency journalists searched for the wreckage.

The wreckage was found in the town of Jinderes in the Afrin district, east of Idlib.

The footage showed that the helicopter was completely disintegrated and broken into small pieces, except for some parts.

The US forces carried out an operation after midnight in Syria’s Idlib province.

Civil Defense teams reported that 13 people, including six children and four women, died in the raid.

Speaking to Anadolu Agency, local security sources said that the US soldiers pulled one person from the house alive and took him away with them.

Anadolu Agency also captured footage of the place where the raid took place.

The footage showed that some of the walls and ceiling of a house collapsed with the bombs dropped during the raid, the kitchen part was burned, all the furniture was destroyed and traces of blood are seen on the floor.

The video also showed the remnants of the ammunition used by the US soldiers.