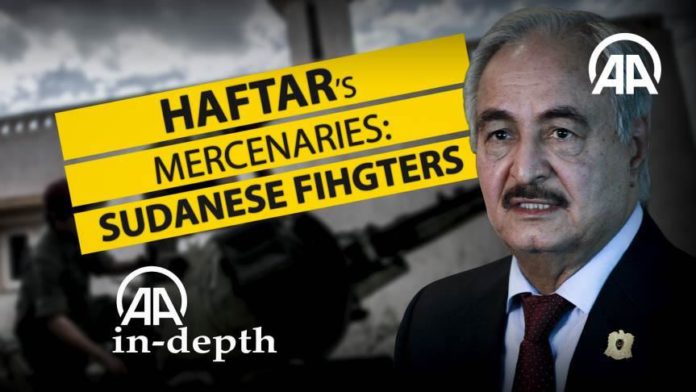 Using painstaking analysis of video footage and other sources, Anadolu Agency has documented that warlord Khalifa Haftar is using Sudanese mercenaries in the fight against Libya’s government.

Especially the presence of Sudanese fighters – deceived by the United Arab Emirates-based security company Blackshield and taken to Libya – is also widely mentioned in UN reports, which Haftar and his supporters continue to ignore.

The first stage of the research, started by screening all written texts and reports containing the words “Sudanese mercenaries” and “Libya,” found that Sudanese fighters first get three months of military training in the UAE’s Al-Ghayathi region and then are brought to Libya’s military airports of Benghazi, Sirte, Ras Lanuf, and Al-Jufra, all of which are under Haftar’s control.

Then the visual data of Sudanese fighters scattered across the country was scanned. Videos shot in places that could not be verified were eliminated.

Among the few remaining videos, a video titled “Sudanese mercenaries are fighting for Haftar in Benghazi” was selected and analyzed.

The social media account which posted the video was being actively used to share visuals from Libya, strengthening the possibility that the video in question was shot in Benghazi.

A mapping technique was also used to verify the video.

A bird’s-eye-view map was drawn by importing sequences of the building and objects in the video, which shows some 100-200 Sudanese fighters taking an oath of allegiance to fight for Haftar.

Despite heavy fog in the location where the footage was taken, the presence of two structures in the background thought to be an oil tank and industrial light poles around it indicate that the place was more of an oil refinery than a military base.

A list of all oil refineries in Libya was then prepared and satellite images were carefully checked one by one.

The building was eventually found at a refinery plant near Al-Jufra, which was the 51st oil facility in a list of 55 refineries. The facility in question largely matched a drawing by an Anadolu Agency correspondent.

The confirmation process, however, continued since the satellite images of the facility were last updated in 2016 and looked different from some structures in the drawing.

At this point, research found that the facility had a Facebook account and had shared more than 2,000 pictures of the refinery.

It was thus concluded that the video was taken from the Zella 74-B oilfield near al-Jufra.

Through this method of rigorous and careful analysis, Haftar’s claim that there are no Sudanese foreign fighters in Libya has been decisively disproven.