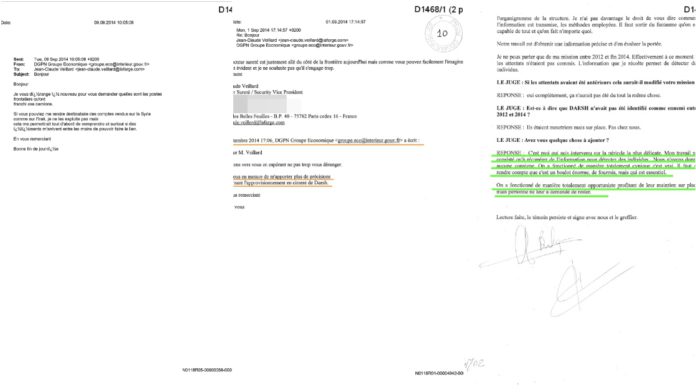 Documents obtained by Anadolu Agency revealed that the cement giant Lafarge constantly informed the French intelligence agencies about its ties with the Daesh/ISIS terror group.

The documents unveiled that Lafarge, which was charged of “complicity in a crime against humanity” over funding Daesh/ISIS terror group to operate in Syria, ran a relationship with the Daesh/ISIS and the French intelligence was aware of it.

​​​​​​​According to official French documents, the relations between Lafarge and intelligence agencies started on Jan. 22, 2014, when the company’s security director Jean-Claude Veillard sent an e-mail to the Interior Ministry’s intelligence directorate.

Veillard, in the mail, said the company needs to maintain relations with “local actors” to be able to continue its operations in Syria. Recalling the negative news that appeared on media about the company, he asked whether executives and the headquarter of the company were under threat.

The intelligence officer, in response, told Velliard about the date when they will address the issue. 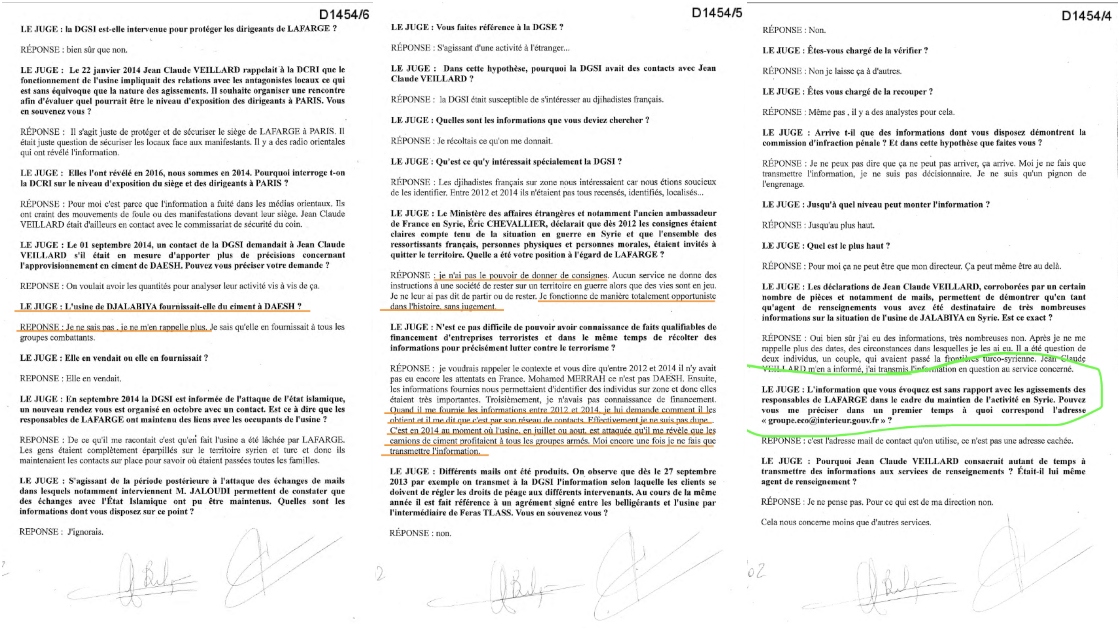 Following the scandalous discussion of the Lafarge-terrorist organization relations in France and the reflection of the issue in the court, the intelligence officer, code-named AM 02, appeared in court on Nov. 18, 2018.

According to the record of the statement, the officer admitted that Lafarge was his source of information in Syria.

The intelligence officer told the judge how the French secret services took advantage of the Lafarge factory.

In the records, the intelligence officer did not exclude Daesh/ISIS, saying Lafarge sent cement to all armed groups in Syria (including the al-Nusra Front) in 2012-2014.

“We approached the situation purely opportunistically, taking advantage of Lafarge’s continued work,” the intelligence officer said in the court. 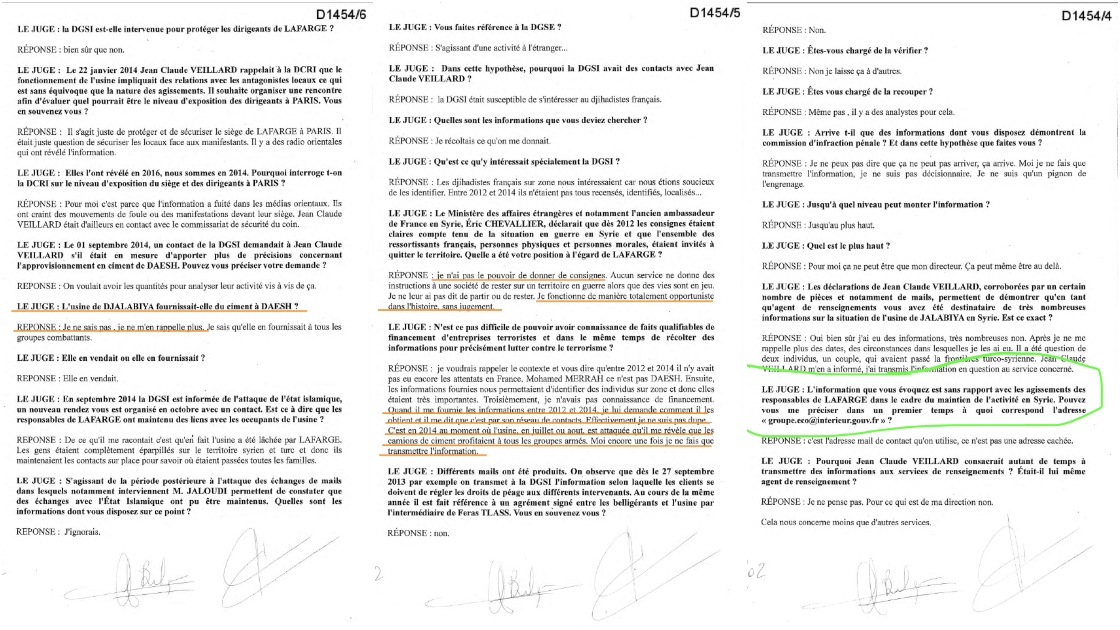 The details of sending cement to the Daesh/ISIS terrorist organization were discussed in a Sept. 1, 2014 correspondence between Veillard, Lafarge’s security director, and the intelligence of the French Interior Ministry.

It was obvious that the French state was aware of Lafarge’s relations with the terrorist organization at the time, which can be inferred from the French intelligence’s statement, saying: “Could you give more details about the cement provided to Daesh?”

Some documents reached by Anadolu Agency indicate that there were more than 30 meetings between Lafarge and the French domestic, foreign, and military intelligence services between 2013 and 2014 alone.

With the supplied cement, Daesh/ISIS is known to have constructed fortified shelters and tunnel network against the Coalition powers led by the US. 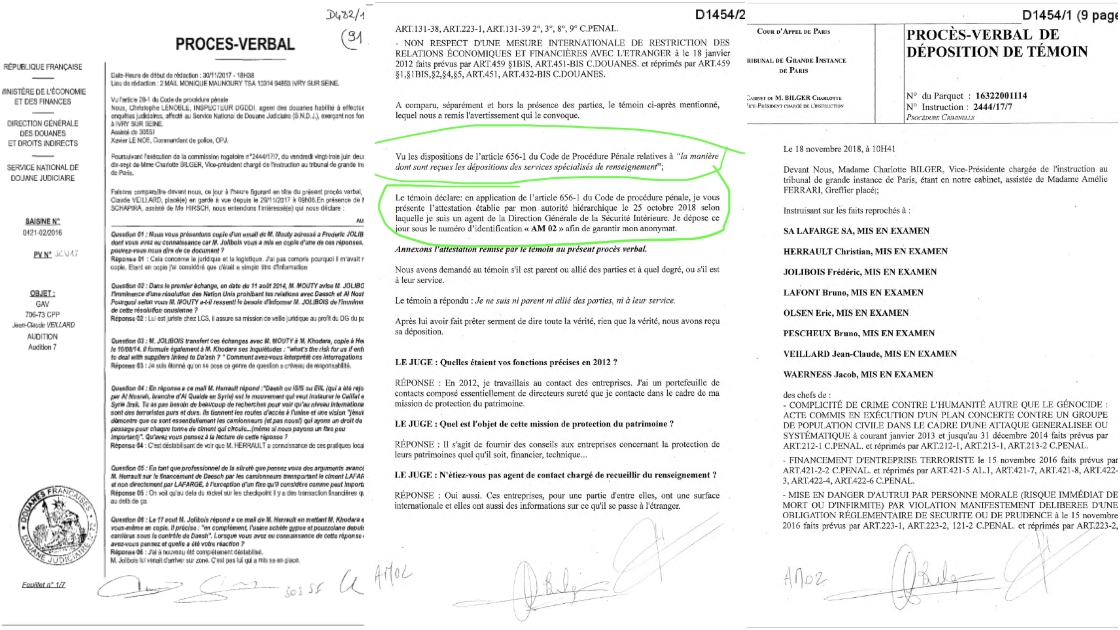 In response to the allegations, Veillard gave testimony to the police on Nov. 30, 2017.

According to the recorded statement accessed by Anadolu Agency, he tried proving that he informed the French state and intelligence institutions about everything he did.

Information related to the meetings, field conditions, as well as speculations that the security director heard were in the appendices of the statement record.

It was found out that Veillard conveyed the field information related to clashes and the military balances between the armed groups.

A handwritten note by Veillard, which was “sent to the French foreign intelligence” was also included in the appendices.

Reports claiming that Lafarge regularly financed Daesh/ISIS during the Syrian civil war surfaced in France in 2016.

According to the French media, the company also supplied materials and fuel to the terror organization for it to continue its activities in the Celibiye region of Syria.

In 2017, while the company admitted having made payments to the armed groups in Syria, it denied allegations of “complicity in crimes against humanity.”

After investigations, eight managers, including two high-ranking officers, were accused of financing terrorism and cooperation in committing crimes against humanity.

The charge of “complicity in crimes against humanity” was dropped in November 2019.

In response, non-governmental organizations took the case to the French Supreme Court, which upheld charges against Lafarge of “financing terrorism”.