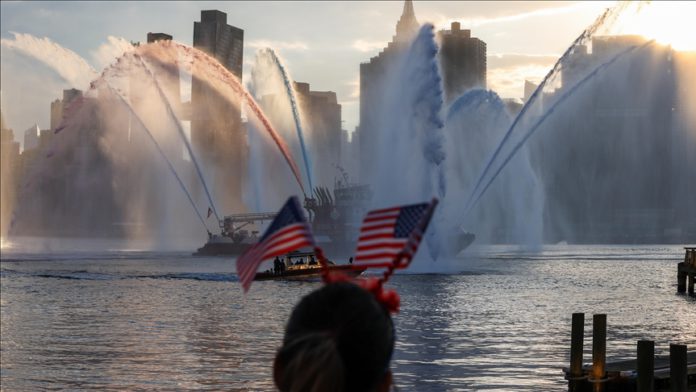 Amid deep political and cultural divisions, a lingering pandemic and economic trials, America still partied like it was 1776 on Sunday.

Annual July 4th celebrations, including fireworks and parades, returned in full or were slimmed down or canceled outright as Americans recognized the signing of the Declaration of Independence, from England, 245 years ago.

In Washington, D.C., thousands of people gathered on a warm night to watch a roughly 17-minute explosion of sky-filling fireworks launched with music. A rousing live performance of the 1812 Overture by the National Symphony Orchestra added to the drama of a spectacular display over the National Mall, which often turned the sky a blood-red, symbolizing the blood spilled in the Revolutionary War.

Beforehand, President Joe Biden hosted a gathering of about a thousand invited guests to the south lawn of the White House, many of them essential workers who fought the COVID pandemic, and gave a spirited address to the nation.

“The 4th of July is a sacred day of history, hope, remembrance and resolve, of promise and possibility,” he bellowed.

Biden compared America’s Declaration of Independence to “independence” from the coronavirus. His goal of 70% of American adults with at least one dose of the vaccine by July 4th fell just short. The Centers for Disease Control and Prevention says that number stands at just over 67%.

Biden acknowledged that “we have a lot more work to do” to beat the virus and implored people to make sure they get the vaccine but said: “We’ve gained the upper hand on this virus. We can go back to our lives. Our economy is roaring back.”

“America,” he said, “is coming back together!”

In New York City, Broadway show performers, a military band and rock bands like Coldplay were provided a stunning backdrop of towering fireworks on a 70-degree night. Cheering crowds decked out in red, white and blue, with sparkling hats and blinking, over-sized necklaces, were treated to traditional patriotic music as 65,000 fireworks shells were blasted from the top of the Empire State Building and five barges sitting in the East River.

But across the country, there were reminders of the struggles of the past year. Countless festivities were canceled out of COVID concerns, particularly with the Delta variant causing new virus spikes in states such as Nevada and Missouri.

And for many communities that moved ahead with holiday plans, like the Chicago suburb of Buffalo Grove, COVID concerns still lingered. The town’s village manager urged residents to keep some distance from each other while watching the town fireworks display and promised that the fireworks would shoot higher in the air so that more people could watch from a distance.

And a number of parades and fireworks shows across the country were scaled back or canceled because when those plans were made earlier in the year, it wasn’t clear what restrictions would be in place on July 4th, so municipalities weren’t prepared for the larger crowds.

And there were communities hampered by another COVID-related problem: a labor shortage. In Wisconsin’s largest city, Milwaukee, the annual fireworks show, along the shore of Lake Michigan, was canceled entirely because there weren’t enough workers to stage the event.

And in the tinder-dry states of the Western US, most fireworks were essentially banned, outside of regulated, approved displays, and even those were scaled back as the West deals with unprecedented hot, dry conditions.

But there were no such concerns in most big cities; people crowded together to watch fireworks along with every imaginable musical performance, from the US military’s oldest active duty band performing in West Point, New York, to country music stars in Nashville, to the Jonas Brothers in Cleveland, to rap stars Ne-Yo and Flo Rida performing in Atlanta and Philadelphia, to the Beach Boys performing, naturally, on the beach in Fort Lauderdale, Florida.

It was all a stunning, smile-filled turnaround from a year ago, when mass gatherings were banned coast-to-coast.

Still, there were divisions; conservative critics piled on singer Vanessa Williams for performing a song written in 1900 called “Lift Every Voice and Sing,” often referred to as the “National Black Anthem,” at the D.C. event.

And nowhere was the political divide more evident than at the massive Mt. Rushmore granite monument in the state of South Dakota that honors Presidents Washington, Jefferson, Lincoln and Teddy Roosevelt.

Fireworks displays there, on hold since 2009, resumed last year on the order of the Trump administration and attracted thousands of visitors, including Trump himself.

The Governor of South Dakota, a Trump ally, sued to get the fireworks celebration back but was turned down by a federal judge.

But for those who were denied a formal fireworks celebration, for whatever reason, there was plenty of do-it-yourself celebrating.​​​​​​​

As always, countless families took to their streets, their backyards and parks to create their own light-and-noise celebrations well into the night.