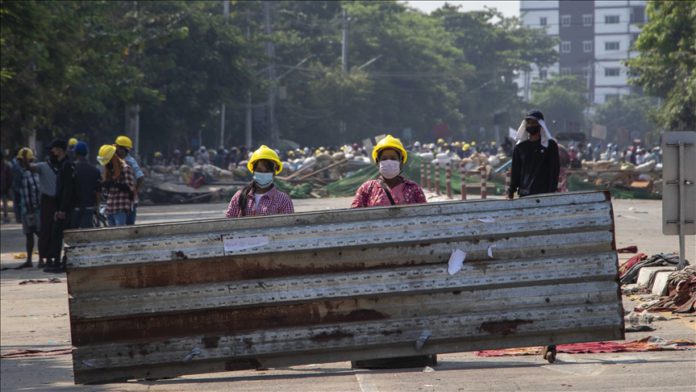 A global human rights watchdog criticized the UN Security Council for not acting against Myanmar military coup leaders engaged in “systematic and premeditated killings” of protesters.

“Along with other rights groups, we have called on the UN Security Council to refer the situation in Myanmar to the International Criminal Court, and bring the Tatmadaw’s [the official name of Myanmar’s army] senior commanders, including Min Aung Hlaing, to justice,” said Joanne Mariner, the director of the Crisis Response at Amnesty International, in a statement issued on Thursday.

“Instead, the Security Council has done nothing, and today we see the same military units turn their fire on protesters,” said Mariner.

According to the statement, the Amnesty International’s Crisis Evidence Lab has verified more than 50 videos from the ongoing crackdown and “can confirm that security forces appear to be implementing planned, systematic strategies including the ramped-up use of lethal force. Many of the killings documented amount to extrajudicial executions.”

“The Myanmar military is using increasingly lethal tactics and weapons normally seen on the battlefield against peaceful protesters and bystanders across the country,” the lab study showed.

On Wednesday, the UN Security Council for the first time condemned the violence against anti-coup protesters in Myanmar and urged the military to exercise utmost restraint.

In a statement, the council said it “strongly condemns the violence against peaceful protesters, including against women, youth and children.”

The new study on Myanmar followed the massive crackdown by junta forces on civilians demonstrating against the Feb.1 military coup in the country. The ruling National League for Democracy leadership and other civil society activists were also arrested.

Massive demonstrations erupted in the Southeast Asian nation since the coup. Over 70 people have been killed in gunfire after junta forces tried to end the anti-coup protests, while over 2,000 have been arrested.

“These Myanmar military tactics are far from new, but their killing sprees have never before been live-streamed for the world to see,” The Amnesty official said.

Mariner said: “These are not the actions of overwhelmed, individual officers making poor decisions. These are unrepentant commanders already implicated in crimes against humanity, deploying their troops and murderous methods in the open.”

He added ethnic minorities including the Rohingya, Chin, Kachin, Karen, Rakhine, Shan, Ta’ang have been persecuted for years by the Tatmadaw.

The killing spree by the Tatmadaw “have never before been live-streamed for the world to see,” he said, adding that the Tatmadaw forces “are increasingly armed with weapons that are only appropriate for the battlefield, not for policing actions.”

“Officers are frequently seen engaging in reckless behavior, including the indiscriminate spraying of live ammunition in urban areas,” the statement said.

Reflecting on the state of media in Myanmar, International Federation of Journalists (IFJ) said the military regime in the country has “intensified its efforts to dismantle the country’s independent media and to block journalists’ ability to work.”

“Legal restrictions, harassment, arrests and increased violence by the military is intended to stop credible information getting out to the public,” the IFJ said in a statement on Thursday quoting journalists working in the country.

At least six journalists have been detained since the coup unraveled last month and could be jailed for at least three years.

The crackdown by the junta has left journalists jobless, the IFJ added.

Quoting journalist Toe Zaw Latt, the IFJ said: “We’re banned from any reporting on any platform, they want to shut us up.”

Fernando Alonso returns to Formula 1 for 2021