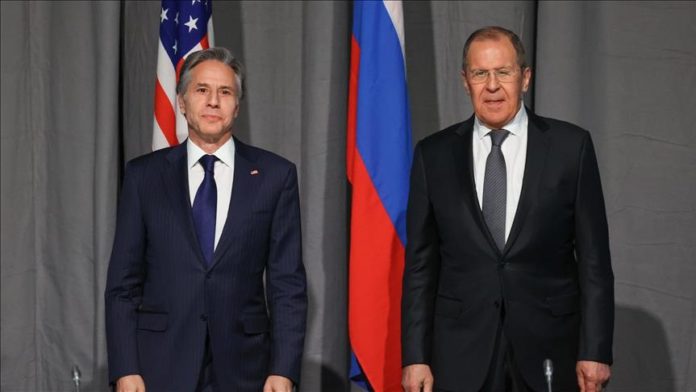 The US secretary of state and Russian foreign minister arrived in Geneva ahead of scheduled talks on Friday in an effort to ease tensions and prevent conflict over Ukraine amid a flurry of meetings this year.

Secretary of State Antony Blinken and Foreign Minister Sergey Lavrov were due to meet at the historic President Wilson Hotel on the shores of Lake Geneva, where many tense negotiations involving world peace have taken place in past decades, with both scheduling press conferences a couple of hours after the meeting.

Blinken had warned Moscow on Thursday that any military aggression against Ukraine would have severe costs for Russia.

He said the US and its allies want a diplomatic solution but are also ready to respond to any military aggression.

Diplomats have low expectations of any significant breakthrough on Friday despite a series of security talks that have already been held this year.

“If any Russian military forces move across the Ukrainian border and commit new acts of aggression against Ukraine, that will be met with a swift, severe, united response from the United States and our allies and partners,” he told a news conference in Berlin.

Russia has said it does not intend to invade its neighbor Ukraine, which was once part of the Soviet Union.

Blinken had also met the foreign ministers of Germany, France, and Britain in Berlin to discuss the latest developments and establish a united approach towards Moscow amid growing fears that a Russian attack against Ukraine could be imminent.

Following the meeting, Blinken said the US and its allies share the same goals and continue to pursue diplomatic efforts to prevent a further Russian invasion or destabilization of Ukraine.

After that meeting, Sherman said she had laid down the line on any possible Russian invasion of neighboring Ukraine.

“We’ve made it clear that if Russian further invades Ukraine, there will be significant costs and consequences well beyond what they did in 2014” — referring to the takeover of Crimea — said Sherman after those talks.

Amid heightened tensions between Russia and the West, eyes have once again turned to the Russian-Ukrainian border and frontline territories.

While diplomatic efforts continue to de-escalate the tension, the world carefully monitors military activities along the border.

According to the UN, fighting between Ukrainian government forces and pro-Russian separatists in Ukraine’s Donbass region has seen more than 13,000 people killed since 2014.

Ethiopia thanks Germany for COVID-19 consignment