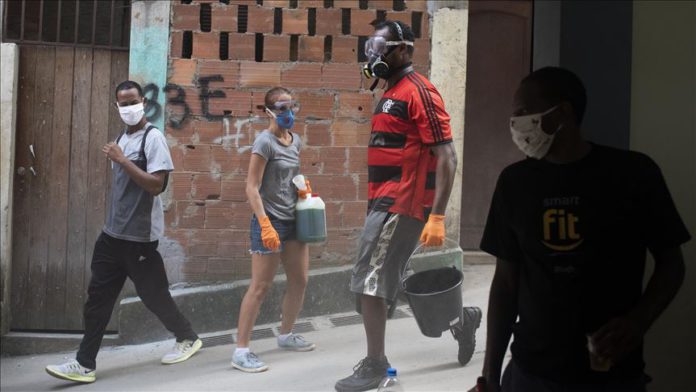 As coronavirus cases decline in many European countries, there is no relief in the Americas.

The American continent surpassed Europe on Tuesday, becoming the continent with the most cases of the novel coronavirus, with more than 1.8 million reported. More than 82,000 people have died in the US and 12,400 in Brazil.

Latin America went from a sole confirmed case on Feb. 26 in Brazil to more than 390,000 official cases this week. But according to experts and local media, the true number of cases is actually much higher amid a lack of sufficient testing.

All figures shared below are compiled according to data from US-based Johns Hopkins University as of Tuesday.

Brazilian President Jair Bolsonaro has included gyms and hairdressers on the list of “essential activities” that can be carried out in states and municipalities where confinement is being enforced to stop the pandemic which has already left 172,790 infected and more than 12,400 dead in the country.

“Whoever is sedentary at home, for example, is increasing their cholesterol levels, their stress issues and a whole lot of problems. But if they could go to a gym — logically in accordance with Health Ministry regulations — they will have a healthier life,” Bolsonaro said.

“It is the same with the hair stylist and barber. And having one’s nails painted and fixing up their hair, it is a matter of hygiene.”

However, when questioned during a press conference, Health Minister Nelson Teich said that he was not aware of the order.

According to Bolsonaro, more than one million people work in these industries.

Japan warned its citizens against traveling to several Latin American countries as the coronavirus continues to spread globally, including Uruguay, Mexico, Colombia and Honduras.

Uruguay reported 711 cases and 19 deaths as of Tuesday.

Japan, which has 15,847 COVID-19 cases and 633 reported deaths, has not recommended travel to approximately 100 countries worldwide, including many in Europe as well as the US and UK, which have the highest number of deaths due to the coronavirus.

Mexico’s Undersecretary of Health Hugo Lopez-Gatell reported 8,544 registered cases of the coronavirus and 111 deaths among medical personnel, the most affected being nurses and doctors.

President Andres Manuel Lopez Obrador said Tuesday that the coronavirus pandemic has not, “fortunately,” hit the country so hard and announced that on Wednesday, he will present a plan to reopen the economy after weeks of quarantine that sought to contain the spread of the virus.

“We’ve been lucky. It’s virtue and luck. Where it first affected, the pandemic exceeded the capacity of both general hospitalization and intensive care in European countries and the United States. We had time to prepare,” he said.

As of Tuesday, Mexico had 36,327 infected people and 3,573 deaths. However, Mexican authorities have acknowledged an under-recording of cases.