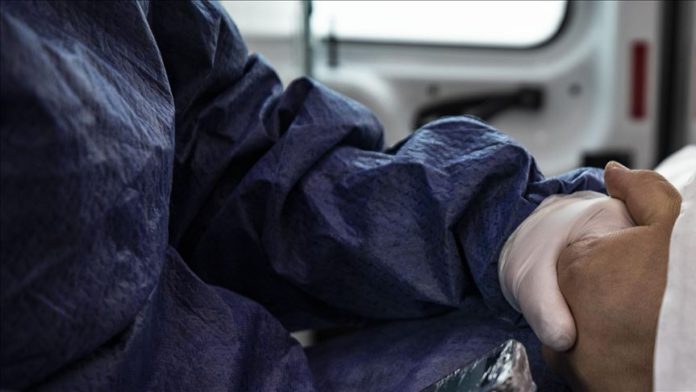 The Amazon region has been in the headlines for several weeks because of the COVID-19 pandemic.

It has a high percentage of its indigenous population experiencing serious health difficulties in dealing with the virus.

But not all news is discouraging. In the midst of a health emergency, some are using their knowledge to take action and help others alleviate the effects of the virus.

Betty Alexandra Souza Mozombite, a public health assistant from the Clan Tigre of the Tikuna Yoi ethnic group, with 16 years of experience dealing with health issues, set out to cross Amazon to help indigenous communities that have been affected.

“At this time of the pandemic we have been working with the most communities and associations we can, sending the message of how we can treat the disease,” said Souza, who is also an indigenous leader, victim representative and advocate for human rights.

Souza told Anadolu Agency she has to travel up to 23 kilometers [14 miles] on a motorcycle or bus and walk five or six kilometers [3 or 3.7 miles] per trail from her home in Leticia to “visit homes that are very isolated and don’t have certain elements or food.”

Many times she goes alone, and she is sometimes accompanied by fellow nurses and other women from an association of victims who help distribute face masks.

The difficult situation is compounded because the Leticia hospital does not have biosafety elements for the community or staff.

“We live in a rural area. In the community we have nothing, there is no health post, absolutely nothing. The only nearby hospital that we have is the one of Leticia, which also lacks many tools, both to attend patients and for the health personnel itself,” she said, explaining residents prefer to stay home and resort to their own means.

“In view of going to a hospital where they have no way to attend to us — why are we going? So we have simply had to resort to all this to safeguard our lives,” she said.

Souza has attended 55 patients, nine in critical condition, and more than 20 by telephone.

-A mix of indigenous knowledge and conventional medicine

Souza studied to be a nursing assistant at the San Juan Bautista Institute in Palmar de Varela, a town in the Atlantico Department in northern Colombia, where she lived nine years after she left her native community following a guerrilla takeover of the Santa Sofia community in January 1993.

“I studied what the whites say, ‘nursing assistant.’” There I learned a lot about the West,” she said, but quickly states proudly that her “roots are of traditional medicine.”

“I come from a curandera, yerbatera family. My father was a shaman in the community. He worked a lot with plants and everything that concerns the ancestral,” she said.

Her father cared for his entire family with natural medicine and Souza is positive that her ancestors gave her the knowledge. “After my father dies, he spiritually gives me that place … although the spirits of my ancestors of all the territories have been feeding me with knowledge.”

Souza narrates a dream her brother had days before the pandemic came to the Amazon where she appeared, surrounded by her parents and grandparents who are deceased.

He thought something would happen to Souza.

Paradoxically or coincidentally, Souza became sick between January and February and experienced symptoms similar to those of COVID-19, including respiratory distress, sore throat, fever and pain in her lungs.

“Being very ill, in bed, gave me the opportunity to understand the illness. I called my husband, I said please put the water to boil, pick me up this plant, and this one and bring it to me. I do the evaporation.”

She began to feel better and tried other treatments, such as taking tea and baths with jungle tobacco and yerbaluisa, which serve an antibiotic and an anti-inflammatory. And she relaxed. But she had “discomfort in her lungs,” something she would resolve days after investigating that people who died with COVID-19 in Italy “had found thrombi throughout their bodies.”

“Then I understood thanks to that, that I did have COVID, and I said, ‘What is bothering my lungs are small thrombi, like residues that remain.’”

“What helps to dissolve them? Well, aspirin, what we know best, which is a drug, but also ginger and garlic, which serve as a purifier,” she said.

Depending on the severity of symptoms, the plants used and frequency and amount of sprays and the use of other medications, such as naproxen, vary.

For example, with less severe cases, it would be necessary only to use naproxen, a steam bath and a lot of tea. For others, the recommendation is herb tea and three aspirin. But for more complex patients, you start with “three sprays, three aspirin for three days, and then one aspirin for 14 days, which is more or less the period that the virus lasts in the body,” she said.

She indicates that although Amazon has many endemic plants, in all countries there are plants that have antibiotic and anti-inflammatory functions.

“So, I recommend a bitter plant, such as the mucuraca, the dandelion, the rue, which works for us as an antibiotic and anti-inflammatory, such as yerbaluisa, orange leaves, mallow, cotton leaves … there is infinity,” she said.

“We cannot ignore that our sister nature and our Mother Earth have given us these plants for well-being, consumption and so that our lives are healthier in this world,” she said.

-Urgent requests for the Amazon

Since the first case of COVID-19 arrived in the region on April 26, Souza claims that many people began to die. “Many indigenous brothers died and started the terror due to a totally unknown disease, everyone was afraid of each other,” she said.

Despite the apprehension, since “we began treating the virus with medicinal plants, death has decreased” in communities.

She had two urgent requests to mitigate the crisis.

First, she asks the Colombian government to intervene in health centers of the department, which “are in misery; corruption has devastated all and during the pandemic, these great shortcomings that health has here came to light.”

She also urged the consolidation of the indigenous peoples’ health system. “We want more support.”

On the other hand, she invites people to put aside “discrimination against health personnel and people who have tested positive.”

And, although political, she asks the government “to do some autopsies on coronavirus victims in order to give a more accurate response, understand (the virus) and save more lives.”

Ford Otosan to suspend production due to supply issues