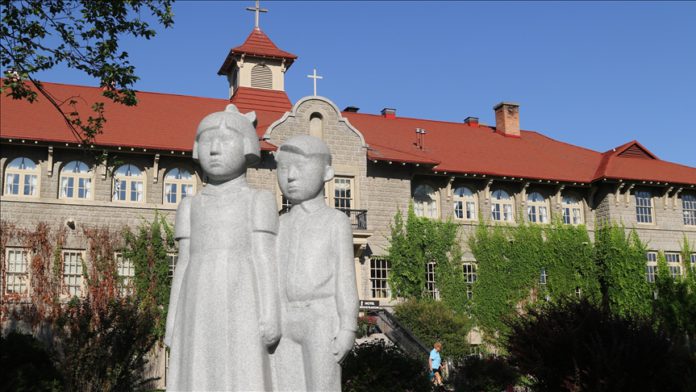 Donald Bolen, a member of the Canadian Conference of Catholic Bishops and Catholic Archbishop of Regina, Friday said the allegations of the burning of children in residential schools were “shocking” while he had never heard such an incident before, but the issue should be investigated.

In an online interview with Anadolu Agency, Bolen delivered remarks on the tragic events unfolding recently, colonization, assimilation of indigenous children, and future steps to be taken to ensure reconciliation.

“There was a mentality of colonization at the time that governed, the government proposed residential schools which took children from their homes very early, and many churches, including the Catholic Church, were complicit with that plan,” said Bolen, adding that children as young as 4 years old were deprived of their family, language, culture, and spirituality.

Underlining that there was a “history of abuse” towards indigenous people, Bolen continued: “It is a painful part of history and the people of Canada. The government and the churches need to own that history now, and to do our part, to make things better, and to create a different kind of society.”

“Schools were opened to educate indigenous children but it was an education by assimilation, it was an education which forced a different culture other than their own upon them and many of those children, when they returned to their homes, did not belong in their own culture, language, spirituality,” he said, and stressed that what happened ran contrary to the gospel of Christianity and its deeper values.

The archbishop went on to note that the events stemmed from colonization and the “arrogant attitude of the colonizing powers” which viewed the European cultures as better and normative, and sought to draw the indigenous people to these cultures, if necessary by force.

The man of religion further said the leaders of indigenous people, accompanied by some bishops, would have an opportunity to meet with Pope Francis in December, hoping he would issue an apology and visit Canada.

“I can’t speak for the mind of Pope Francis but when he came to Bolivia few years ago he extended an apology to the indigenous peoples of the Americas. … We know that that is in his heart but how he will respond is for him,” he said. “If a problem has taken a hundred years, 120 years to make, it is not going to be solved in a few days, nor by one visit.”

Asked about the burning of churches in Canada in the past few days, he said such acts were an “expression of deep anger” within the community, and it was not known if churches were set on fire by indigenous people.

“We know that there is a great anger right now and a need to express that anger but we hope that anger leads to dialogue, and to constructive ways of building relations, to engaging in the calls to action together, and not the burning of churches, which does not help us forward,” he said.

“We need to work to take steps to make amends to rebuild relationships, we need to stand in solidarity with indigenous people in their rightful pursuit of justice. We need to listen, we need to respect, take their leadership in how we can work together, that is the way to get from truth to reconciliation, it is a long journey,” he concluded.

Bishop in Canada comments on unmarked graves, suffering of Indigenous community, steps to be taken in near future