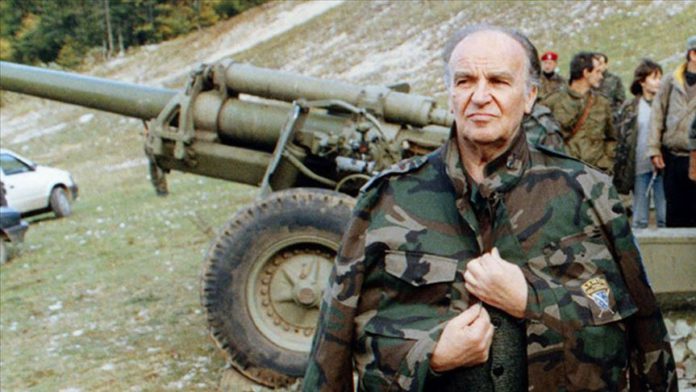 The first President of Bosnia and Herzegovina, Alija Izetbegovic’s ideas were moral compass in my life, said his grandchild.

Nadja Berberovic Dizdarevic, the grandson of the late Alija Izetbegovic, recalled her memories to Anadolu Agency on the occasion of the 17th anniversary of Alija’s death.

Izetbegovic — a politician, writer, lawyer and philosopher who came to international prominence during the bitter 1992-1995 Bosnian war — is commemorated every year on his death anniversary.

“His ideas remind me of my roots and personality. They became a kind of moral compass in my life,” said Dizdarevic.

She said that her grandfather was an extremely charismatic, honorable, and characterful person.

“Alija Izetbegovic is not just a politician or a leader in my eyes. First of all, I see him as a philosopher intellectual. He was a free-spirited rebel and a passionate reader since he was young,” said Dizdarevic.

Dizdarevic emphasized that Alija’s works and attitude towards life are rooted in the Islamic tradition and also European roots.

“Both enriched his spirit and ideas. Alija Izetbegovic is a symbol of free spirit and thought for me,” said Dizdarevic.

Dizdarevic, who is the director of the Alija Izetbegovic Museum in Sarajevo, said that this year they organized a series of programs as part of the death anniversary of Alija.

She explained that within the scope of the epidemic measures, they will hold a lower participation commemoration and photo exhibitions this year.

Stressing that her grandfather Alija is her idol, Dizdarevic said, “I am also proud to be his grandchild and to be able to announce the moral values ​​he devoted to his life through the activities organized in the museum that bears his name.”

She added that those who will visit the Alija Izetbegovic Museum can learn much more about the social, political, and intellectual life of Izetbegovic.

“A leader who strikes a balance between East and West”

The historian Admir Lisica, who works at the museum, emphasized that when we look at the geopolitical world relations today, the number of leaders such as Alija Izetbegovic who strikes a balance between East and West is very low.

Lisica noted that Aliya’s first steps in diplomacy are not well known by neither the region nor the Bosnia and Herzegovina public.

She said that Alija’s visits to Austria, Iran, Turkey, and the USA are very important before the independence of Bosnia and Herzegovina.

“Our youth coming from abroad share the knowledge they have gained here with their peers in the countries they live in. This is an important issue in the transfer of Alija’s ideas to future generations,” said Lisica.

Izetbegovic, who is often dubbed as the “Wise King”, died in Sarajevo on Oct. 19, 2003, of natural causes, having served as president of the Republic of Bosnia and Herzegovina from 1992 to 1996 and as chairman of the Bosnian presidency until October 2000.

Alija, who left the people of Bosnia and Herzegovina an internationally recognized independent and sovereign state, died on 19 October 2003 in the capital Sarajevo.

Izetbegovic whose funeral was attended by more than 150 thousand people from different countries, was buried in the Martyrs’ Cemetery Kovaci in Sarajevo after his will, as he said, “wanted to be buried in a humble grave among the martyrs”.