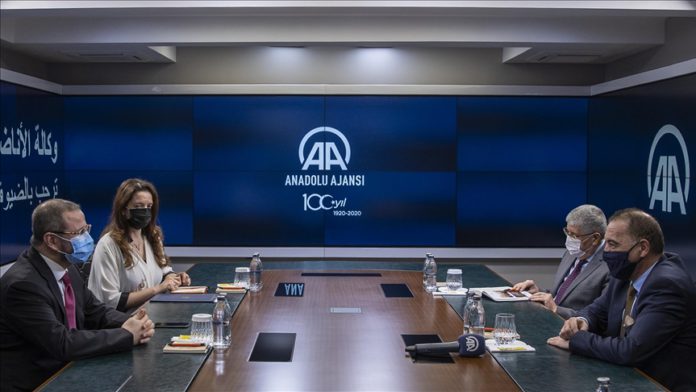 Algeria’s ambassador to Turkey Mourad Adjabi and an accompanying delegation on Wednesday visited Anadolu Agency’s headquarters in the capital Ankara.

Ambassador Adjabi expressed his satisfaction with the visit and stated that they want to cooperate with Anadolu Agency at an advanced level in the future.

Adjabi also said that he worked in Algeria’s consulate in Istanbul as deputy consul general between 2007-2008. He also talked about his happiness to come back to the country as the ambassador, nearly ten years later.

“I started working as an ambassador in this beautiful and important country. It is my main mission to further advance relations between the two countries, that has been excellent from past to present,” Adjabi said.

Recalling that Turkey’s leading international news agency broadcasts in 13 languages, Kazanci said Anadolu Agency would be happy to contribute to the improvement of ties between Turkey and Algeria.

The director-general also informed Adjabi about the agency.

The delegation then visited the news departments of Anadolu Agency and was informed about the departments.

Adjabi served as the Director for International Political Affairs at Algeria’s Foreign Ministry between 2018-2019 and President of the National Committee of Prevention and fought against trafficking in persons between Dec. 2018 – Sept. 2019 before starting his career as ambassador to Turkey in 2019.

Founded in 1920, Anadolu Agency is a leading global news agency operating across the world. It serves subscribers in more than 100 countries, including the Americas, Europe, the Middle East, Asia, and Asia-Pacific.